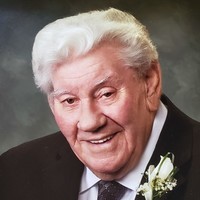 Mass of Christian Burial for Frank Rambin will be at 11:00 a.m., Wednesday, October 9, 2019 at St. Matthew’s Catholic Church, Gillette, WY, with Father Bryce Lungren officiating; interment will follow at Mt. Pisgah Cemetery, Gillette, WY. Visitation will take place from 4:00 to 6:00 p.m., Tuesday, October 8, 2019 at Gillette Memorial Chapel with a Rosary at 6:00 p.m. Frank Rambin age 89, of Gillette, WY passed away Friday, October 4, 2019 at his home. Frank Louis Rambin was born on February 13, 1930 in Powhatan, LA to Mary Allie (Bynog) and Paul Rambin. He graduated from Natchitoches High School. In May 1951, he enlisted in the US Army and was stationed in Germany during the Korean War. After his honorable discharge from the US Army, Frank met Wanda June Robbins the love of his life in Aspermont, TX and the couple were married in June of 1954. Frank began his career in Aspermont, TX as a pumper in the oil field. In 1960, they moved their family to Tioga, ND where Frank continued working as a pumper. The family moved to Gillette, WY in 1962 where he operated a roustabout service until he retired. The couple moved to Rozet and built their dream home on 340 acres where they grew a large garden, raised chickens, grazed cattle and enjoyed the country life. Frank was a life-time member of the American Legion. He enjoyed hunting, fishing, and spending time with his family and friends. Frank will be remembered by his family as a wonderful provider, loving father, and great teacher. Frank is survived by his wife of 65 years, Wanda; daughters, Jackie (Ken) Adair; Judy (Dan) Fritzler; grandchildren, Heather (Jon) Carnahan; Stephanie (Larry) Casteel; Parker Teske and Josh Rambin; along with eight great-grandchildren, and two great-great-grandchildren. He is preceded in death by son, Jed Rambin and parents, Mary and Paul Rambin and sister, Helen Brewton. In lieu of flowers the family request that memorials be made in Frank’s name to benefit VA Hospital, American Legion, Healing Hearts Home Health or a charity of your choice. Memorials and condolences may be sent in care of Gillette Memorial Chapel 210 West 5th Street, Gillette, WY 82716. Condolences may also be expressed at www.gillettememorialchapel.com

To order memorial trees or send flowers to the family in memory of Frank Louis Rambin, please visit our flower store.