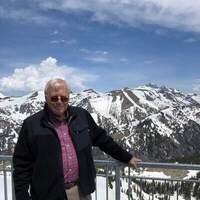 A gathering of family and friends for Frank Hoadley will be held from 11:00 a.m. to 12:00 p.m., Tuesday, September 6, 2022 at Gillette Memorial Chapel with graveside service to follow at Mt. Pisgah Cemetery with Rev. Dick Grady of Colorado Springs, CO officiating. Frank Ross Hoadley was born November 3, 1944 to Joseph and Frances Hoadley in Saint Louis, MO where Doctor Joe was finishing his residency. The family would relocate to Gillette, WY after Doc Joe finished his service as an Army surgeon. While growing up, Frank enjoyed hunting antelope, deer and rabbits on the family homestead ranch south of Gillette. Frank was schooled in the Campbell County school system and completed his senior year of high school as a foreign exchange student to Australia. Frank continued his education at the University of Wyoming receiving a Bachelor's Degree in English Literature. Frank would stay on at the University for a few more years while serving as a campus police officer before taking a position as a detective in the Laramie police department. Frank was later hired by the city of Laramie to work as the City Manager where he served for several years. Always looking for new opportunities Frank took a position with Boettcher and Associates in Denver, CO. Frank left investment banking to take up the position of Capital Finance Director for the state of Wisconsin where he would serve under four different governors from 1987 until his retirement in 2013. Frank was very highly regarded by his peers and considered a standard bearer of state debt management. As Capital Finance Director Frank introduced a number of innovations including the introduction of extendible municipal commercial paper. He was a champion of strong issuer disclosure and plain language in financial documents. His leadership and guidance in the Government Finance Officers Association was very influential. In 2008 Frank was given a lifetime achievement award by The Municipal Forum of New York. Congresswoman Gwen Moore of Wisconsin is submitting a statement honoring Frank Hoadley into the United States Congressional Record. Frank is preceded in death by his father Joseph, mother Frances, and his first wife Myrna Crout.  He is survived by his sister Jeanette, brothers David and Clyde, his wife Elizabeth, and daughters Marci and Jessica. Frank passed away August 4, 2022 while vacationing with his wife in Scotland. Memorials and condolences may be sent in care of Gillette Memorial Chapel 210 West 5th Street, Gillette, WY 82716. Condolences may also be expressed at www.gillettememorialchapel.com

To order memorial trees or send flowers to the family in memory of Frank Hoadley, please visit our flower store.