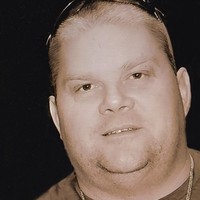 Funeral service for David Barnett will be held at 11:00 a.m., Saturday, December 21, 2019 at Gillette Memorial Chapel. Visitation will take place from 4:00 p.m. to 7:00 p.m., Friday, December 20, 2019 at Gillette Memorial Chapel. Frank “David” Barnett, age 47, passed away of natural causes at his home in Gillette, WY on Sunday, December 15, 2019. David was born in Louisville, Kentucky on September 8, 1972 to Pat Thompkins and Alex Barnett. David started working railroad clean-up at 17 years of age. He moved to Gillette, Wyoming with former wife Sharon Green-Barnett and their four children. He started working for RJ Corman, and worked his way up to the position of VP of the region. On January 26, 2012 he married Kari Outzen. After many years of hard work David, Kari and friend John Tinsley founded their own business Rapid Response Railroad. David and Kari enjoyed traveling together, attending concerts, darts, going to the beach, boating, and playing slots and cards in Las Vegas. One of his favorite past times was cheering his kids on in their activities, and spending quality time with his grand-children. David is survived by his wife, Kari Barnett, his father, Alex Barnett, mother and step-father, Pat and Vernon Thompkins, grandparents, Frank and Eleanor Dotson, Gertrude Barnett, brothers Tim and Alex Barnett, and sister, Jamie Sowards, Uncle, Greg Dotson,  children Alex, Andrea, Andrew and Austin Barnett and step-children Bren and Kelsie Pullman, grand-children, Aevea Mosley, Cashton Franklin, Brody and Bentlie Pullman, Pyper and Lawson Price, and numerous aunts, uncles, cousins, nieces and nephews. He is preceded in death by his grand-father Jimmy Barnett. A memorial has been established in David’s name to benefit Scott County Football Scholarship in Georgetown, Kentucky and may be sent in David’s name to the Walker Funeral Home 410 Medical Arts Court, Gillette, WY 82716. Condolences may also be expressed at www.walkerfuneralgillette.com

To order memorial trees or send flowers to the family in memory of Frank David Barnett, please visit our flower store.