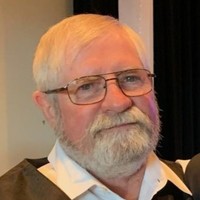 Francis Patrick “Pat” Sweeney was born on the seventh day of the seventh month of 1951 and was one of seven children born to George William and Patricia Ann (Stout) Sweeney.  He was born and raised in Gordon, Nebraska on a farm southwest of town. Pat attended one room country schools until he entered high school graduating from Gordon High School in 1969. Like all good Nebraskans, he was a lifelong Husker’s fan.

After high school, Pat moved to Gillette, Wyoming.  He first worked for Jones construction as a roustabout, long hours 7 days a week. In 1974 he became an apprentice electrician and in 1978 he became a licensed Master Electrician. He started his own business, S&S Electric, with his good friend Jerry Shane. After S&S Electric he worked for R&G Electric, Darryl’s Electric, Solving Tech and Thunder Creek Gas Services, where he retired.  He took great pride, in his work and was one of the longest licensed master electricians on file in the state of Wyoming. He trained countless apprentices and journeymen over the years on how to do things right.

Pat was a hardworking, do-it-yourselfer (especially during NFL off season). After retirement, he became the founding member of the Sweeney Garage, where a cold one was always available. He had a one-of-a-kind group of buddies he could always count on to stop by and enjoy a beer (or ten), a Broncos game, a cribbage tournament or some Merle Haggard. Most people would agree Pat was the funniest guy they knew. A visit to Sweeney’s garage always guaranteed witty comments, sarcasm, and inappropriate jokes.

Pat also knew how to find fun outside of the garage. He loved the outdoors, especially spending time in the Bighorn Mountains camping, four-wheeling, and fishing. He enjoyed Harley rides with his buddies, whiskey, and visiting Deadwood. He was always prepared for whatever he was doing and valued time spent with family and friends.

He cared deeply for, and occasionally aggravated his siblings, but they would all agree he was a great brother.  He is survived by his siblings George (Nancy) of Rushville, NE; Nancy Scherr (Al) of Gordon, NE; Mike (Julie) of Norfolk, NE; Sue Becker (Terry) of Cheyenne, WY; and Dennis (Raquel) of Pleasant Dale, NE. His brother Jerry Gillette, Wy, who preceded him in death was always in his thoughts.

He is also survived by his many nieces and nephews. He was proud of and loved every one of them and they could always count on Uncle Pat to keep things interesting and make them laugh.

One of Pat’s biggest sources of pride were his children and grandchildren. He is survived by his son, Patrick of Golden, CO; daughter Mandie Wagner (Nick) of Marion, IA from his marriage with Jonnie (Wanke) Teets; and daughter Jessa Steeg (Jacob) of Rapid City, SD from his marriage to Delores Conway Lawrence; and his grandkids who meant the world to him, Samantha, Grant, and Ella.

He was treated like extended family by the Cooper, Dorn and Shane families and had many other truly great friends that enriched his life.

While he sometimes had a hard-outer shell and stubbornness, his friends and family were lucky to also know his caring, loyal and humorous side.  We have a hole in our hearts and wish we could enjoy one last witty comment.

Please join us in celebrating Pat’s life at the Gillette Memorial Chapel on the Tuesday, January 7th at 2 pm, and reception to follow at the Fireside Bar and Lounge from 4 – 6 pm.  Come enjoy a beer, it’s what he would have wanted. Memorials and condolences may be sent in care of Gillette Memorial Chapel 210 West 5th Street, Gillette, WY 82716. Condolences may also be expressed at www.gillettememorialchapel.com

To order memorial trees or send flowers to the family in memory of Francis Patrick Sweeney, please visit our flower store.