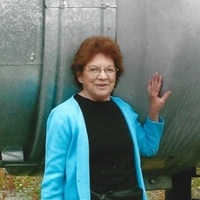 Faye Isabelle (Nickerson) Guedesse was 84 years old when she was called home to our heavenly father. Faye passed away on Monday October 10, 2022, in Gillette, WY at Campbell County Health due to natural causes. Faye was born to Warren and Vivian Nickerson on October 29, 1937, in Hannah, North Dakota. She had three sisters and two brothers. Faye married Frank Guedesse in Minot, ND on February 5, 1961.They later had two children, their daughter, Christine and their son, David. Faye and Frank moved their family to Gillette, WY and opened Gillette Ice Company along with Frank's Refrigeration. Faye was not only a wonderful mother to her two children she was also an impeccable businesswoman. As Faye grew older, she spent her time enjoying a good book, baking sweet treats to offer company, or her grandchildren to raid the cookie jar as it was always full. Faye is survived by her daughter, Christine Hornsby; her brother Clifford Nickerson; her daughter-in-law Shelley Martens; her grandson Ryan Tullis, and granddaughters Courtney Oshanick, and Nicole Lyon, her seven great-grandchildren, along with several nieces, nephews, and cousins. Faye is proceeded in death by her husband, Frank Guedesse, her son, David Guedesse, her parents Warren and Vivian Nickerson, her siblings Albert Nickerson, Bernice Guedesse, Clarice Heines, and Sharon Decker. Faye's family and friends are invited to attend her graveside service at Mount Pisgah Cemetery on Monday, October 17, 2022 starting at 2:00 PM. The family will welcome everyone for coffee and cookies at the cemetery shelter immediately following the services to celebrate the life Faye lived while here with us. Memorials and condolences may be sent in care of Gillette Memorial Chapel 210 West 5th Street, Gillette, WY 82716. Condolences may also be expressed at www.gillettememorialchapel.com

To order memorial trees or send flowers to the family in memory of Faye Isabelle Guedesse, please visit our flower store.