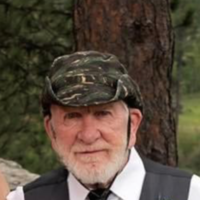 A public visitation will be held for Geno on Thursday, April 28, 2022 beginning at 12pm, immediately followed by a graveside service at Mt. Pisgah Cemetery at 1pm. Eugene “Geno” Koski age 79, of Gillette, WY passed away at his residence on April 19, 2022 in Gillette, WY. Geno was born on June 22, 1942, to Ernest W. Koski and Lorraine M. Halliday Koski in Duluth, Minnesota. He graduated from high school and enlisted in the United States Air Force in 1960 where he received his welding certification and was an Aircraft Welder. He was honorably discharged in 1966. He was married to Darlene Conatser and from this union had two children Jayleen and Janel Koski. The couple was later divorced. He was then married to Patricia (Rawls) and in this union had two children Sha (Koski) Seely and Gina (Koski) Pehringer. The couple was later divorced. Geno resided in Minnesota, California, Washington, Colorado and then found his home in Gillette, Wyoming where he found his career with Amax Coal for 14 years. In his spare time throughout his life, you would find him boxing, racing, building/driving hot rods, fishing, hunting, camping, listening to music, gardening and lifting weights. He found joy in his family and friends but loved to be on his land at home where he found his peace. He would often venture off to the mountains for months at a time in his early retirement to be in nature hunting and fishing with just him and his dog. His many stories and teachings will be greatly missed by those that were close to him. Geno is survived by his daughters Jayleen Koski of Napa, CA; Gina Pehringer of Buffalo, WY; granddaughter, Brittani Mellott of Gillette, WY; grandson, Timothy McLaurie of Gillette, WY; brothers, Don Koski, Al Koski, George Koski, Loren Koski and sister, Sandy Koski all of Minnesota and friends. He is preceded in death by his father, mother, daughters Janelle and Sha, sister Laverne, and son-in law Tony. Memorials and condolence may be sent in care of Gillette Memorial Chapel 210 West 5th Street, Gillette, WY 82716.

To order memorial trees or send flowers to the family in memory of Eugene Richard Koski, please visit our flower store.