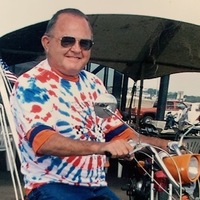 Remember that guy you saw zipping around Gillette on his Moped? And the guy you saw at all the garage sales and auctions during the summer months? The guy who knew no strangers and was friendly to everyone?  Remember the PE teacher that collected trophies and had them rein scripted for his badminton tournaments for his elementary students and who held Jump Rope for Heart to raise money for the Heart Association? Yes, that was Ernie Cummings. Those who knew Ernie saw a man with a tremendous sense of humor who loved to play practical jokes but would give you the shirt off his back.

Ernest LeRoy Cummings passed away peacefully at the age of 82 in Gillette, Wyoming on March 9, 2021 from complications of various health problems. He was born March 6, 1939 in Upton, Wyoming, to Howard and Anne Cummings. He was raised and schooled in Upton where he participated and excelled in sports, especially basketball, football, and baseball. He graduated from Upton High School in 1957. He went on to Black Hills Teacher’s College in Spearfish, SD, for a short time then went to work in the oil fields.

In 1961 he joined the Navy. During his time in the service, he served 14 months at Pearl Harbor then put in for submarine duty where he spent his last 2 ½ years of Duty stationed in New London, CT, when he wasn’t at sea traveling the world. While in the Navy he became an electricians’ mate and earned the rank of E5. A week before he was discharged, he met the love of his life, Judy Annette Leuthard. Ernie would never admit he believed in love at first sight and there was never a formal proposal, but they had such a connection from the beginning that when he said to her, he needed to talk to her parents, she knew what he meant and ten days later on August 6, 1965 they were married. So began their journey together for the next 55 ½ years.

Ernie and Judy returned to Wyoming and settled in Gillette where Ernie worked in the oil fields once again until after their son, Scott, was born. Ernie decided he wanted to go back to college, so they moved to Spearfish where they both attended Black Hills State College and acquired their teaching degrees. After Ernie graduated, they moved back to Gillette where Ernie began his teaching career as a PE teacher and Judy followed behind teaching Business Ed in the High School. They taught for 27 years and retired in 1997. For the next 20 years they traveled extensively.

Ernie was a pool player and spent a good 40 years playing the game throughout the state and attended many National Pool Tournaments in Las Vegas. One year he earned the honor of Wyoming State Pool Champion. In his younger years he loved to hunt. He definitely was an outdoor kind of guy.

Ernie is survived by his spouse, Judy of Gillette, son Scott of Reno, NV, granddaughter Amanda and great granddaughter, Madison of Montpelier, ID, two sisters, Bernie Ruff of Dubois and Lucy McKenzie of Upton, and numerous nieces, nephews and cousins.

There will be a private internment ceremony at Inspiration Gardens at Mt. Pisgah cemetery in Gillette. The date is impending. A Celebration of Life service will be held at a later date. Memorials and condolences may be sent in Ernie’s name care of Walker Funeral Home 410 Medical Arts Court, Gillette, WY 82716. Condolences may also be expressed at www.walkerfuneralgillette.com

To order memorial trees or send flowers to the family in memory of Ernest LeRoy Cummings, please visit our flower store.