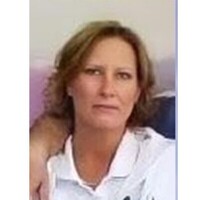 Erin Kristin Richards was born in Duncan, Oklahoma to Philip and Carol Richards on December 26, 1970 and passed away on April 5, 2021 in Gillette, Wyoming. Erin lived in many states while she was growing up, Oklahoma, Missouri, Maine, Alabama, Georgia, Florida and Louisiana. She loved spending time with her father and attending church. In 1994 Erin was blessed with the birth of her daughter, Kristin Nichoal. She was blessed once again in 1995 with her son, Greg/ The light in Erin’s life was her children. She was the best mother and would give the shirt off her back to anyone in need. Even when handed a tough hand, she made sure her children were protected and well taken care of, as well as making her famous Jambalaya and Gumbo. Right up until her passing, Erin always made it a point to tell her children how proud they made her. She made sure that her children knew they were loved. Erin was hardworking and would do whatever it took to see her children smile. She was gentle, kind, and loving. She was their hero; their everything. Anytime spent with their Mom, was spent creating good memories. After hurricane Katrina in 2005, Erin moved from Louisiana to Gillette, Wyoming to find work and make a home with her children. In 2014 Erin received the best gift of becoming a grandma, or “Peepaa” as the kids called her. Peepaa (grandma) to six beautiful and wonderful grandchildren: Myrah Nichoal, Cylus Ryan, Dawson Nevaeh, Nova and Kasyn. Her grandchildren meant the world to her and it showed by her unconditional love. She is survived by her daughter Kristin (Denali) of Naples, Utah and son Greg Lee (Robyn) of Gillette, Wyoming, brothers, Marc Richards, Jason Richards, Jeff Richards, Michael Richards and William Richards. She was preceded in death by her parents, Philip and Carol Richards. Erin will be remembered through the smiles of her grandchildren, the strong will in her children and the love that she shared with everyone. Memorials and condolences may be sent to Kristin Hutt 1350 S 1900 E, Naples, Utah. Condolences may also be expressed at www.gillettememorialchapel.com

To order memorial trees or send flowers to the family in memory of Erin Kristin Richards, please visit our flower store.