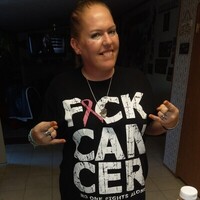 Erica Marie Azure (Smilie), 42, passed away Monday, August 8, 2022, from cancer at Campbell County Memorial Hospital surrounded by her loving family and friends. She was born in Casper, Wyo on October 18, 1980. She was the oldest of three children born to Eric and Ginger Fleming. She was raised in Casper and Las Vegas, Nevada and graduated from high school in Wyoming. She married the love of her life Patrick Scott Azure on November 14, 2008 but celebrated 18 years of happiness together. She and her husband, Scott, were heavily involved with the Affiliates Motorcycle Club in Gillette, Wyo. Erica lived by the motto: “Be strong. You never know who you’re going to inspire.” Throughout her life she never met a stranger; loved camping, fishing, riding her side-by-side and motorcycles; tye dye, glitter, attended all types of concerts with family and friends and was a connoisseur of “Colorado cigarettes.” She was a fierce fighter of cancer and a supporter of patients who were also fighting the disease. She also helped organize fundraisers to help others during their cancer fight.  Erica is survived by her husband Scott and her children Justin (stepson) and Halle Aasen, Gabe and Zach of Gillette. Her parents Eric and Ginger Fleming of Casper. Her grandfather Newt Weber of Casper, Wyo. Sister Kayla Fleming of Casper, Wyo. Brother Cody and Tiffany Fleming of Casper, Wyo. She was a beloved aunt to her many nieces and nephews, which included her extended biker family. Preceding her in death are her grandmother Lois Weber of Casper, Wyo. Uncle Byers Allen Fleming, III of Casper, Wyo. Aunt Carita Landess of Casper, Wyo. Cremation services were provided by Gillette Memorial Chapel. A funeral service will be held on Saturday, August 20 at noon at Church at the Barn, 2 W. McKenzie Road in Gillette with Mike Morrison officiating. Reception will be held afterward at the Sundance Lounge, 1020 US Hwy 14-16 in Gillette. In lieu of flowers, donations may be made to the Northeast Wyoming (NEW) Community Health Foundation’s Cancer Care Committee at www.newcommunityhealth.org <https://www.newcommunityhealth.org>  or 307.257.7057.

To order memorial trees or send flowers to the family in memory of Erica Marie Azure, please visit our flower store.