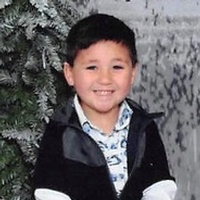 Funeral service for Eragon Christensen will be held at 10:00 a.m., Friday, January 25, 2019 at Gillette Memorial Chapel with Eragon’s great-uncle, Lutheran Minister, Tom House officiating; interment to follow at Greenwood Cemetery in Upton, WY. Carrying Eragon to his place of rest will be pallbearers: Jeffery, Williem, Wayne, Brandon, Danny, and Walter. Honorary pallbearers include: Lucas, Garrett, Dakoda, Rylan, Oliver, and Theo. Visitation will be held from 4:00 p.m. to 7:00 p.m., Thursday, January 24, 2019 at Gillette Memorial Chapel. Eragon Ronnan Christensen, age 4, of Gillette, Wyoming passed away from a car accident on January 12, 2019 in Wright, Wyoming.

Eragon was born in Gillette, Wyoming on August 28, 2014 to Amber Christensen and Christopher Stuart. Christensen was later adopted by his grandparents, Rosalie and Carl A. Christensen III, who provided a warm and loving home to Eragon. It quickly became apparent to anyone who crossed paths with Rose and Carl that Eragon was the light of their lives and source of happiness. Young Eragon was known to be an energetic boy, bringing happiness wherever he went. He loved going to school at the Children’s Developmental Center, meeting new people, and helping his Papa fix the truck. Eragon in turn had an abundant appreciation for dinosaurs, swimming pools, and anything with an engine.

Eragon is preceded in death by Carl A. Christensen Jr. and great-uncle Leonard.

To order memorial trees or send flowers to the family in memory of Eragon Ronnan Christensen, please visit our flower store.