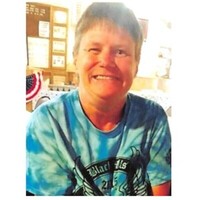 Emily Hicks passed away on October 14, 2021 at her home in Gillette. She was the third child of Donnie Hicks and Betty Trigg Hicks. She was born in Boulder, CO. When she was six weeks old, she moved with her family to Hawaii They lived there for 2 ½ years before moving to Winter Park, FL. After her parents divorced, she moved with her Mother to Sturgis, SD. They lived there until June 1980, when they moved to Gillette. In 1987 she graduated from Campbell County High School. She moved to Sheridan and attended college there, before moving to Greeley, CO, to the Center for Independence. While there, she was a trainer for a recycling center. In 2005 she came home to Gillette. She was employed at Walgreens for fifteen years. Emily was an active lifetime member of the Loyal Order of the Moose Lodge 1957 and The Women of the Moose, Chapter 1955. She had received the Academy of friendship and College of Regents. She was very proud to have these honors. She was a computer whiz, everyone came to her when they needed help with their computer. She enjoyed spending time with her friends, traveling with her Mother, going to visit relatives and sightseeing. She was preceded in death by her Grandparents, her father, her stepfather, Ralph Kisgen, several Uncles and Aunts. She is survived by her Mother, Betty Trigg, brothers, Chris of Gillette and Aaron of Winter Park, FL., also many aunts, uncles, and cousins. There will be a celebration of life at the Moose Lodge in Gillette at a later date. In lieu of flowers, please make donations to Moose Charities at moosecharities.org or to the Moose Lodge 1957 in Emily’s honor. Memorials and condolences may be sent in care of Gillette Memorial Chapel 210 West 5th Street, Gillette, WY 82716. Condolences may also be expressed at www.gillettememorialchapel.com

To order memorial trees or send flowers to the family in memory of Emily Ann Hicks, please visit our flower store.