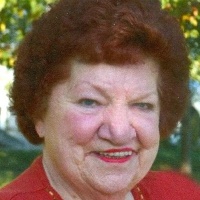 Funeral service for Elsie Rosier will be held at 2:00 p.m., Thursday, July 18, 2019 at First Assembly of God; interment to follow at Mt. Pisgah Cemetery. Visitation will take place from 4:00 p.m. to 7:00 p.m., Wednesday, July 17, 2019 at Walker Funeral Home. Elsie S. Rosier passed away Friday, July 12, 2019 at The Legacy in Gillette, Wyoming. She was born November 24, 1933 in Wyoming Township Kent County Michigan, near Grand Rapids. Elsie was born to Edward and Margaret (Harig) Gibbs. She attended Godwin High School in Grand Rapids, where she had a job as a waitress. She was raised Catholic and was active in her Church, even singing in the choir. Growing up she traveled around on the carnival with her parents where her Mom and Dad performed the motorcycle act, The Wall of Death. At age 13, Elsie and her family moved to Florida for a profitable business opportunity with the Rosiers-Moonshining! This is where she met her future husband Robert Rosier for the first time. From that very moment she knew she was going to marry him. After a brief time of moonshining, the still was raided and her father ended up serving time. During this her Mom, brother, and her moved back to Michigan. At age 18, Elsie and her family moved back to Florida permanently. Elsie and Robert were married a year later on December 2, 1952 in Tampa, Florida. They had six children who were all born in Tampa. Elsie helped create a family band “The String Stealers” and was their biggest supporter, she never missed a performance. She had a love for music and was a talented dancer who would often win first place with her jitterbug skills. Elsie and her husband owned and operated a family farm where they raised many animals as she has always had a love for her animals. In August of 1976, Elsie and her family moved to Gillette, Wyoming for better job opportunities. She started a position with the School District where she drove bus until her retirement in 2002. After her retirement she babysat her great-grandchildren who kept her busy. Elsie enjoyed spending time with her family. She enjoyed having her grandchildren and great-grandchildren over. She would take them on many adventures from the drive-in movies to garage saleing on Saturdays to going to Wall Drug which was her favorite place. She enjoyed crocheting and even taught all her grandchildren how. She loved the Holidays, especially Halloween was her favorite. She always had a large supply of candy and made sure each trick or treater left with a full bucket. Elsie kept a strong Faith in God her whole life. Being Catholic, she would buy Rosaries and give them to people who were ill, having surgery, or if she just felt they needed one. Her family always teased that she had a direct line to God. Nothing ever slowed Elsie down or kept her home. She was super sociable and was well known in the community. Many say she had the biggest heart and she was well liked. She is survived by her children, Terry (Jack) Forgar, Robert Rosier II, William (Tammy) Rosier, Edward (Cindy) Rosier, and Rebel (Robert) Miller. Her grandchildren, Billy (Tammie) Bennett, Terry (Jon) Lueras, Cassy (Cody) Morris, Toby (Courtney) Bennett, Rudy (Heather) Rosier, John (Marcella) Rosier, Daniel (Tammy) Rosier, Willy (Sara) Rosier, Murphy Rosier, Katie (Sam) Boothe, Daniel (Jenny) Mitchell, Kari (Rich) Hopkins, Matt (Jenny) Mitchell, Ben Mitchell, Jeremy Mitchell, Edward (Katie) Rosier, Josh (Amanda) Knittel, Robert (Toni) Miller III, Sandy Miller, 39 great-grandchildren and nieces and nephews. She is proceeded in death by an infant sister, Jeralee; husband, Robert Rosier Sr.; infant son Baby Rosier; granddaughter, Heather Knittel; grandson, Joshua Mitchell; her parents and grandparents. In lieu of flowers memorials are encouraged in Elsie’s name to benefit a local animal shelter of your choice. Memorials and condolences may be sent in care of Walker Funeral Home 410 Medical Arts Court, Gillette, WY 82716. Condolences may also be expressed at www.walkerfuneralgillette.com

To order memorial trees or send flowers to the family in memory of Elsie Shrilda Rosier, please visit our flower store.