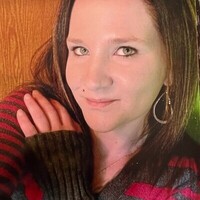 Beth Ann Montoya was born in Rozet, Wyoming on September 17, 1981 completely unexpected to Bev (Welper) Sanchez.  She was the oldest of three siblings, Julie, Jody and Cristian. Beth spent her whole life living in Gillette, graduating from CCHS in 2000. Beth passed away completely unexpectedly at her home on May 2, 2022. In Beth’s early years, she did odd jobs such as babysitting and housekeeping until she found her true passion, taking care of the developmentally disabled population. She worked for Sol Domus Inc for 22 years.   She gave the clients her all, giving them the best lives imaginable while helping them be as independent as possible.  The “guys” will miss her terribly, she grew up with them. She was more than just their caretaker; she was their family. She married Daniel Montoya on December 1, 2014. She always said she searched for him forever, and he was her best friend. No matter the troubles and trials they went through together, she loved him fiercely. She had a loud, one of a kind laugh that will be remembered by all who knew her. And her stubborn ways, oh how she was stubborn. Once she had her mind made up, nothing and no one could change it. She loved to draw but was fiercely private with her artwork. She always worried others wouldn’t love what she put her heart and soul in to. She loved to color in the intricate adult coloring books. I don’t think there was a movie she didn’t watch, and she never missed an episode of Law and Order. In fact, she’d seen each episode no less than three times. She also was obsessed with collecting mini things; like shopping carts, wagon, pool balls, serving tray, colored pencils, and many other things. Anything tiny she came across, she had to have. She had three cats, Big foot, Baby and Barbara (who was ironically, a male) those were her babies. The way she spoke of them, you would have thought they were babies. They were taken in and being loved for the rest of their days by those closest to her. She is survived by her husband Daniel Montoya; mom, Bev Sanchez; sister Julie (Gabe) Koerper; brother Cristian Sanchez; nephews Evan, Landon and Mason Koerper and Dom Aguilar; nieces Gabryella Koerper and Izzy Aguilar; brother-in-law, Jose Aguilar; her special friend, Chris Kanash; several cousins, an aunt and many friends who were like family. She is preceded in death by her little sister Jody Sanchez, Grandpa Harold Welper and Uncle Gary Welper. Memorials and condolences may be sent in care of Gillette Memorial Chapel 210 West 5th Street, Gillette, WY 82716. Condolences may also be expressed at www.gillettememorialchapel.com

To order memorial trees or send flowers to the family in memory of Elizabeth Ann Montoya, please visit our flower store.