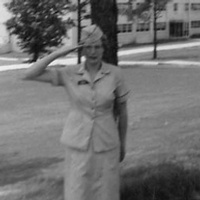 Mass of Christian Burial for Elizabeth Emmons will be held at 10:00 a.m., Thursday, March 15, 2018 at Blessed Sacrament Catholic Church in Wright, WY. In lieu of flowers the family request that memorials be made in Elizabeth’s name to the American Legion. Elizabeth Emmons age 76 passed away on March 10, 2018 at Campbell County Memorial Hospital.  Elizabeth Mae (Cook) Emmons was born on July 9, 1941 in Warroad, MN to Delphia (Foster) and Robert Cook. She graduated from Mt. Iron High School in 1960. She entered the Army following graduation and was part of the Women’s Army Corp as a Cryptographer. She loved to travel and had visited 49 of the 50 States as well as Canada. She married Leonard Emmons in June of 1981. The couple took frequent trips to visit friends and family. Elizabeth was also an avid wolf enthusiast. Elizabeth is survived by her husband, Leonard Emmons of Wright, WY; sons, Thomas (Karen) Flores of Payallup, WA; Don (Chris) Emmons of Shepherd, MI, Daniel Emmons of Los Angeles, CA; daughters, Kelly Burk of North Carolina; Kendra (Deron) Gross of Midland, MI; Angie (Rody) Sumandig of Puyallup, WA; brother, Bruce (Jane) Cook of Pahrump, NV; along with 15 grandchildren and five great-grandchildren. She is preceded in death by her parents, Robert and Delphia Cook; and brothers, Robert (Pud) Cook and Raymond Cook; and sister, Lois Wachlin. Memorials and condolences may be sent in care of Gillette Memorial Chapel 210 West 5th Street, Gillette, WY 82716. Condolences may also be expressed at www.gillettememorialchapel.com
To order memorial trees or send flowers to the family in memory of Elizabeth May Emmons, please visit our flower store.