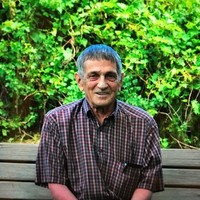 Edmund Lee Sherman age 77, passed away peacefully in the arms of his family September 13, 2019 at The Legacy Living and Rehabilitation Center.

Edmund “Ed” was born on April 20, 1942 in Billings, MT to Edmund and Marie Sherman. He was voted prom king and held many state records for track. Ed was named captain of both the Football and Basketball teams and went on to graduate from Billings Central Catholic High School.

Ed was a US ARMY veteran proudly serving in Germany for a few years. After arriving back in the states, he met up with his longtime friend Sandra Hardy. The two of them married in 1968 and had four daughters; Stacey, Terra, Melanie and Marlo. He owned a landscaping business with his father for many years. He and Sandra relocated to Gillette, Wyoming where he started his career as a coal miner. He was given the nickname of “Fast Eddie” by his co-workers due to his incredible work ethic. He retired from coal mining in 2007 where he continued his love of gardening and enjoyed spending time with all of his grandchildren.

After battling pulmonary and vascular issues as well as lung cancer, he was called home to be with his parents.

Ed will be remembered for his teasing jokes, his wildly entertaining stories, his generous smile, his ornery sense of humor and his willingness to help anyone out.

He is proceeded in death by his parents: Edmund and Marie Sherman, siblings: Jim Sherman, Bruce Sherman and Melody Reighard.

The family wishes to thank the staff of The Legacy Living and Rehabilitation Center who cared for him for the past 2 years, especially those that were there by his side the last couple weeks of his life, passionately taking care of him.

Family and friends are invited to celebrate Ed’s life Saturday, September 21, 2019  at 1:30 p.m. The Legacy Living and Rehabilitation Chapel. Immediately following we will continue the celebration at Gillette Brewing Company. In lieu of flowers the family request that memorials be made in Ed’s name to benefit The Legacy; purchasing of Christmas gifts for residence. Memorials and condolences may be sent in care of Gillette Memorial Chapel 210 West 5th Street, Gillette, WY 82716. Condolences may also be expressed at www.gillettememorialchapel.com

To order memorial trees or send flowers to the family in memory of Edmund Lee Sherman, please visit our flower store.