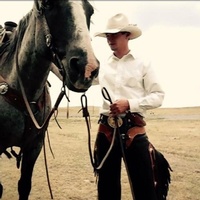 Funeral service for Dylan James Humes will be held at 11:00 a.m., Friday, June 29, 2018 at Moorcroft Town Center in Moorcroft, WY with Pastor Randy Blakeman officiating; interment to follow at Moorcroft Cemetery. Visitation will begin at 5:00 p.m. to 7:00 p.m., Thursday, June 28, 2018 at Gillette Memorial Chapel in Gillette, WY. Dylan James Humes age 19, passed away in the early morning hours of Tuesday, June 26, 2018 from injuries of a vehicle accident near Hulett, WY. Dylan James Humes was born on January 18, 1999 in Camp LeJeune, NC to Sharon(Leary) and Jeromy James Humes. Dylan attended elementary school in Moorcroft, WY and graduated from Moorcroft High School in 2017. He had completed one semester of college at EWC in Torrington, WY and was planning on attending Northwest College in Powell, WY in the fall to wrestle and study for a degree in Physical Education. Dylan loved cowboy work of any type.  He also enjoyed saddle bronc riding and wrestling. Dylan worked for Fowler Ranch and Kissack Water & Oil. Dylan is survived by his parents, Jeromy and Sharon Humes of Moorcroft, WY; brothers, Wesley Wilkinson Martin and Dayne John Humes; and sister, Haylie Brook Humes. He is preceded in death by his great-grandfathers, Ralph E. Humes and Raymond C. Bunner; and great-grandmother, Lucille A. Humes. Memorials can be made to Dylan James Humes Memorial Scholarship Fund. Memorials and condolences may be sent in care of Gillette Memorial Chapel 210 West 5th Street, Gillette, WY 82716. Condolences may also be expressed at www.gillettememorialchapel.com

To order memorial trees or send flowers to the family in memory of Dylan James Humes, please visit our flower store.