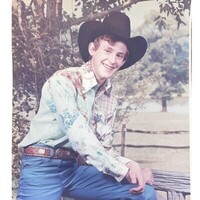 Douglas William Howard Hardy, 61, of Gillette, Wyoming died April 19th of complications of diabetes at Campbell County Memorial Hospital. Doug was born February 25th 1961 to Larry and Barbara Hardy in Gillette, WY and spent his early years in Wyoming and moved to colorado with his family in the mid 60’s. When the family moved to Colorado, he then went to school in Westminster and Boulder, Colorado. He participated in Little Britches, Junior Rodeo and competed all throughout High School. He was a highpoint saddle bronc and bareback rider, winning many buckles and all around saddles. He also held many records for track and field at Fairview High School. He married Monica Little and became the proud Dad of a baby girl, Lacey Jeanne. He then married Yolanda Hernandez and again was blessed with a son, Austin Jay. He later married Cheryl Stradly where they became good partners in training and showing horses. He loved all animals, especially dogs, horses and we can’t forget his two kitties Pete and Bootsy. He loved watching wildlife so much that he was constantly called a “boulder bunny hugger.” He spent his life in the livestock industry training, showing, and brokering horses. He loved visiting with old-timers, sharing a beer and hearing about family and friends' early life in Campbell County. He was proud to be a fourth generation Campbell County native, descendant of the Deavers, Anderson Rourke and Hardys’. In his early childhood he thought the world was made of grandmas and grandpas, having two sets of grandparents and three full sets of great grandparents. He came from a long line of pranksters and practiced the art religiously, that was how you know he liked you. Doug never met a stranger and was always willing to lend a hand. He is survived by his parents Larry and Barbara Hardy, his children Austin Jay and Lacey Jeanne Hardy, and one granddaughter, Marilyn. He was also survived by his sister Sherryl (Gene) Hardy, one uncle, Robert (Neva) Hardy, and two aunts. He was also survived by his niece Taylor Pickett and nephew, Timothy Pickett, as well as many cousins. Memorials are suggested to benefit Wyoming Junior Rodeo Association PO Box 1041, Ranchester, WY 82839. Memorials and condolences may also be sent in care of Walker Funeral Home 410 Medical Arts Court, Gillette, WY 82716. Condolences may also be expressed at www.walkerfuneralgillette.com

To order memorial trees or send flowers to the family in memory of Douglas William Howard Hardy, please visit our flower store.