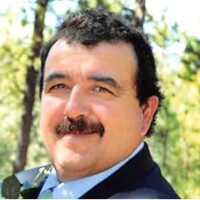 Memorial service for Douglas (Doug) Gales will be at 11:00 a.m. on Friday, February 12, 2021 at the Family Life Church, with Pastor Marty Crump officiating. Doug Gales, age 59, passed away on January 28, 2021 at Campbell County Memorial Hospital after a courageous battle with COVID-19. Doug was born on December 1, 1961 to Gene Gales and Pat (Mines) Allen in Mitchel, South Dakota. His family moved to Gillette in 1975. He has called Gillette his home ever since. Throughout his younger days Doug was active in all kinds of sports, coaching Little League, and anything kid related. He attended Central School, Twin Spruce Junior High, and graduated from Campbell County High School in 1980. In 1982, Doug met the love of his life and best friend, Theresa Roswold. They were married December 29, 1987. Over the years, their family grew with Adrian, Nicole, and Shelby. His children meant everything to him, and he did not think life could get any better until he was promoted to Grandpa. Doug was a jack of all trades, gaining invaluable experience through various jobs. At the time of his death, Doug was employed as a heavy equipment operator at Belle Ayr Mine. The job that really molded him was the experience he gained from his 20 years in the railroad infrastructure industry. Doug loved to spend time with his family. He was an avid hunter and fisherman. His passion consisted of anything sports related. He was a faithful fan of the Raiders and Wyoming Cowboys. Doug also loved a great game of poker. One of his and Theresa’s favorite places to play was Deadwood. Doug will always be remembered for his mischievous smile and kind heart. Doug never knew a stranger. His love for his family and friends knew no end. You could count on Doug to be there no matter your circumstance. Those left to carry on his legacy include his wife, Theresa, children: Adrian (Katy) Alvarado, Nicole (Serena) Gales-Jeffress, and Shelby (Jasmine) Moe-Gales. Grandkids: Kale, Bergen, and Vivian Alvarado. Brothers, Tim and Chuck Gales, and sister, Heidi (Phil) Bellor. Mother-in-law, Maria Roswold. Brothers-in-law, Mike and Edwin (Cheri) Roswold, and numerous nieces, nephews, aunts, uncles, cousins, and forever friends.  He was preceded in death by his parents, Clayton and Pat Allen, father-in-law, Edwin Roswold, his grandparents, Charles and Evelyn “Omi” Mines and Jan and Annie Lamers. Condolences may be sent to Nicole Gales-Jeffress, 906 Richards Ave., Gillette, WY 82716. Memorials and condolences may be sent in care of Gillette Memorial Chapel 210 West 5th Street, Gillette, WY 82716. Condolences may also be expressed at www.gillettememorialchapel.com

To order memorial trees or send flowers to the family in memory of Douglas Eugene Gales, please visit our flower store.