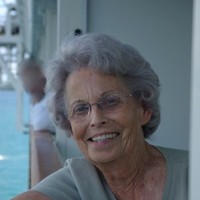 Dorothy Jane (Sheppard) Ray, 93, entered Heaven on November 5, 2019, after a lengthy and valiant battle with dementia. Her home for the past year was at The Legacy Living & Rehabilitation Center in Gillette, Wyoming, but her heart was in Tucson, Arizona. She loved the warmth of the sun!

Jane was born in Kansas City, Missouri (the “Show-Me State”) on September 16, 1926, to the late Claude and Ella Mae Sheppard. Raised in Topeka, Kansas, she was the youngest and only girl of three children. She was married to the love of her life, her late husband, Howard Eugene Ray, on June 28, 1946, in Topeka. Jane is survived by her three children, Nancy Mills (Gillette, Wyoming), Susan Cleveland (Tucson, Arizona), and Robert Ray (Dianne) (Lafayette, Colorado), 8 grandchildren and spouses, 14 great grandchildren and spouse, siblings-in-law, numerous nieces and nephews, and her beloved dog, Pippa.

Growing up during the Great Depression, Jane’s life held many challenges. Yet, she emerged a bright and vivacious young woman who caught the eye of an eager, young Naval officer at a USO dance in Topeka, near the end of World War II. Their love story spanned more than five decades before Howard was taken from her by brain cancer in 2001. In 1951, they moved to Tucson, Arizona, which became their home base throughout their marriage. Jane’s life with Howard (a specialist in agricultural development in developing countries) was an adventure - living in five states and D.C., and accepting overseas tours in Brazil, India, Guatemala, and Sri Lanka, in addition to visiting many other countries. Jane became a master at packing and unpacking the family’s lives, making them comfortable in every location, oftentimes being the only parent at home while her husband travelled. And, she made it look easy. Jane was happiest when busy. She worked throughout her adult life, from putting her husband through three college degrees to partnering with him in overseas work, and with many other administrative positions in between.  When she wasn’t working, she was about the Father’s business in helping others – her family, her friends, her church, animals of all kinds, anyone in need. When Jane and Howard moved to Tucson, they became charter members of the newly forming Northminster Presbyterian Church. Jane was the last surviving charter member.

In lieu of flowers, donations can be made to the Elephant Sanctuary in Tennessee (elephants.com) or any other animal rescue shelter, or to Northminster Presbyterian Church in Tucson (npctucson.org) in memory of Jane. Memorials and condolences may be sent in care of Gillette Memorial Chapel 210 West 5th Street, Gillette, WY 82716. Condolences may also be expressed at www.gillettememorialchapel.com

A memorial service will be held at The Legacy Living & Rehabilitation Center Chapel in Gillette, Wyoming, on November 15, 2019, at 2:00 pm.

To order memorial trees or send flowers to the family in memory of Dorothy Jane Ray, please visit our flower store.