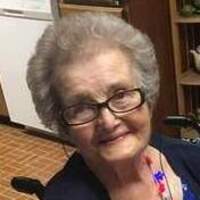 Mass of Christian Burial for Dorothy Edwards will be held at 10:00 a.m., Saturday, June 13, 2020 at St. Matthew's Catholic Church with Father Cliff Jacobson officiating; interment to follow at Mt. Pisgah Cemetery; To protect the health and safety of all, masks are required to attend the service as required; along with social distancing as required by Catholic Diocese and state authorities We encourage you to view the service as it will be streamed live on our website; www.gillettememorialchapel; a link will be attached to Dorothy's obituary page.  Visitation will take place from 4:00 p.m. to 6:00 p.m., Friday, June 12, 2020 at Gillette Memorial Chapel; vigil to begin at 6:00 p.m. Dorothy J. Edwards was born July 5, 1927 to Gabriel and Marie Louise (Audup) Rangunot in Buffalo, Wyoming.  She was the third child, joining older siblings, Catherine and Raymond.  They were later joined by Annette and Theresa.  Dorothy was an excellent student; she played the trombone in the high school band. She graduated from Johnson County High School in 1944 and soon after moved to California to go to Telegraph Operator School and work for Western Union. She was later transferred to Arizona and then worked as a Western Union Operator in Gillette in the rock building just west of First Interstate Bank. It was while she was working at Stockmen’s Bank that she met Bill Edwards.  She later told her grandchildren that she knew he was “the one” the first minute she saw him.  They were married March 25, 1949 in Sheridan, Wyoming. They moved to Sundance shortly after their wedding and worked for Dr. Port on his ranch and for Chipper and Margie Chatfield.  They returned to Gillette and lived in the little house by his parents near what is now The Gillette Fishing Lake.  While there, Bill worked as a rural mail carrier, did some farming and began their sheep business with his brother Carl.  They started their family in the little house, and in 1959 they purchased the family ranch south of Gillette from Chelmer Wilmot.  They had 6 children over the years; Barbara Jean, Johnny Bill (Bunk), Thomas Wayne, Harry Deyoe (Deb), Joseph Leon (Lee) and Martha Anne. Dorothy was very involved with the ranching business. She was involved in every aspect of the ranch and was meticulous with her bookkeeping.  She was a very proficient lambing helper, but it was far from being her passion. Like most ranch wives, she had countless chilled down lambs and calves warming up in her kitchen over the years.  She was very proud to have been a Charter Member of the Thunder Basin Belles Extension Club.  She treasured the friendships that she made over the years with the ladies from “Club”.  It was a well-known fact that very little could keep the ladies from their meetings. At a time when the roads were not paved and it was over 45 miles to town, the ladies did not let muddy roads or blizzards keep them from the few times they could socialize. Dorothy loved to play the piano and was a voracious reader.  She was a talented artist and her family is grateful that each of her children have something she painted. She loved to cook, which was a great thing as she raised her family and cooked for all the brandings, dockings, shearings, livestock shipping, and she fed a very large haying crew for many years. She had grown up learning to cook on a coal stove, so she was truly grateful for one powered by propane.  She enjoyed collecting cookbooks, as well as glassware and other antiques.  She was a dedicated gardener.  She and Bill would have acres of potatoes and corn, which she canned and preserved for the family.  Dorothy loved to socialize, from the 4-H pitch parties to later being involved with her special group of bridge players.  She loved to go to Deadwood and was very lucky. She never lost money. She would only tell you how much she won, never what she had spent to win it. Dorothy did not hesitate to zip off a letter to the Editor of the newspaper if she felt another point of view needed to be aired.  She was a tiny force to be reckoned with and was much beloved by her family and friends and will be greatly missed. Dorothy is preceded in death by her adored husband Billy Deyoe Edwards, her parents, her sister Catherine Parks, her brother Raymond, her son-in-law John Borthwick, a granddaughter and a great granddaughter. She is survived by daughters Barbara Borthwick and Martha Edwards of Gillette, Sons; John (Suzi), Tom (Leah), Lee (Char) of Gillette and Deb (Susan) of Upton. Grandchildren; Mike Borthwick, Jason Borthwick, Aileen Rodgers, Frannie Fillinger, Johnny Bill Edwards, Jr, Holly Edwards, Lane Edwards, Sarah Carstens, Billy Edwards, Megan White, Lindsey Kuhbacher, and Phil Edwards and all of their families including 18 Great Grandchildren. In lieu of flowers the family requests donations to The Shriners Children’s Hospital in Salt Lake City.  Memorials and condolences may be sent in care of Gillette Memorial Chapel 210 West 5th Street, Gillette, WY 82716. Condolences may also be expressed at www.gillettememorialchapel.com

To order memorial trees or send flowers to the family in memory of Dorothy Jeanne Edwards, please visit our flower store.