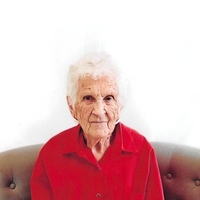 Memorial service for Doris Graham will be held at 11:00 a.m., Saturday, June 5, 2021 at First Presbyterian Church with Reverend Joe Tagliaferre officiating. Doris U. Graham, age 93, of Gillette, Wyoming, passed away January 14, 2021, four days short of her 94 Birthday.  Doris was born in Fedora, SD to William and Erma (Coles) Clarke, the youngest of four children.  She was raised in Fedora and graduated from Fedora High School in 1945.  She married John “Jack” Graham on April 7, 1946 and together they had two children, Terrel and Gerald.  The couple first moved to Denver, CO and after Denver they followed work in the oil fields to Kaycee, WY to the family ranch, where they settled and built their first house.  In Kaycee Doris would play Taps for all Veterans funerals.  They would later move to Gillette, WY in the summer of 1961. Doris was a longtime member of the First Presbyterian Church.  She had many talents, but it was her love of music that always kept her busy.  Doris was a member of the Gillette chapter of the “Sweet Adelines” singing group.  She was also a founder member of Gillette’s Uptown Sounds.  Doris was an avid volunteer and lived to serve.  Doris is survived by her son Gerald “Jerry” Graham of Gillette, WY, granddaughters Jennifer (Logan) Triplett of Basin, WY, Kathryn (Colin) Jones of Thermopolis, WY, Didi (Brad) Lyon of Norfolk, NE and by four beautiful great grandchildren, Sawyer, Lena, Brayden, and Brycen. She was preceded in death by her husband John “Jack” Graham, her son Terrel “Terry” Graham, and by three brothers and their spouses. A celebration of life will be held at a later date. Memorials and condolences can be sent in Doris’ name in care of Gillette Memorial Chapel, 210 West 5th Street, Gillette, WY 82716.  Condolences may also be expressed at www.gillettememorialchapel.com

To order memorial trees or send flowers to the family in memory of Doris Graham, please visit our flower store.