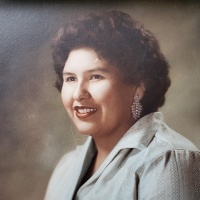 Mass of Christian Burial for Doris Badwound will be at 10:00 a.m., Friday, July 12, 2019 at St. Matthew’s Catholic Church, Gillette, WY, with Father Cliff Jacobson officiating; interment to follow at Mt. Pisgah Cemetery, Gillette, WY. Visitation will begin at 3:00 p.m. Thursday, July 11, 2019 at St. Matthew’s Catholic Church; with Rosary is at 7:00 followed by a traditional wake through the night.

Doris Ann Badwound was born to Minnie (Little) and Albert Six Feathers, Sr. on May 6, 1939 in Allen, SD.  She was educated and grew up in the Allen complex where her family lived.  Doris began her spiritual journey on July 3, 2019 when she succumbed to heart failure in Cheyenne, WY.

She married Joy Badwound on March 1, 1957 after his discharge from the U.S. Army.  Their first child, son Joy Badwound was born on January 6, 1958 but died shortly after.  Doris and Joy moved to Kimball, Nebraska where Joy began working in the oil fields and two of their children were born.  For awhile, they lived in Hermosa, SD where Joy worked on the Kaiser ranch.  In 1962 they moved to Gillette, WY where they settled and raised their own eight children together, as well as several grandchildren. The Badwound home was always open and all were welcomed.

Mr. and Mrs. Badwound devoted themselves to their children and grandchildren, and supported their various activities.  They enjoyed attending many events, which included band concerts, plays, wrestling tournaments; and baseball, basketball and football games. Doris attended St. Matthew’s Catholic Church and enjoyed playing bingo and traveling, often making trips to Deadwood and the Black Hills.

To order memorial trees or send flowers to the family in memory of Doris Badwound, please visit our flower store.