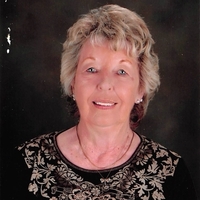 Donna May Hotchkiss passed away December 8, 2020 after a prolonged illness. Much to Donna’s request she was able to spend most of her final days at home with her son Clayton Overman and her much loved dogs. Donna was born in 1938 in Lusk, Wyoming to Stanley and Lillian Johnson where she graduated high school. Donna’s first marriage resulted in the birth of her three sons, Craig Overman, Clayton Overman, and Clinton Overman. Donna found her true soulmate in Phillip Hotchkiss and was married in 1972 gaining two daughters, Debbie Morgan and Tere Ross. Donna lead a full life with her passions shared with Phil and her family.  The Black Hills holds a special place in Donna’s heart with years passed snowmobiling and spending time at her cabin.  Known for her love of dogs Donna had more than her fair share; most will remember Donna with some sort of large and vociferous dog by her side. In Donna’s later years she enjoyed the weekend ritual of spending time perusing through the local garage sales with friends; there was no telling what gems Donna would drag home! Donna spent much of her life in service with the Campbell County School district including driving school bus as well as various administrative rolls while operating “The Yamaha Shop” with her husband Phil. Donna was preceded in death by her husband, Phil Hotchkiss; her sister, Betty Mayworm and both of her parents.  Donna now enjoys reunion with her husband Phil who passed in 2007 to whom she has missed terribly.

Donna is survived by her children, Craig Overman (Suzie); Clayton Overman, Debbie Morgan, Tere Ross, and Clinton Overman (Toni).  In addition, Donna is survived by her 13 grandchildren, and multiple great-grandchildren. Per Donna’s request no services will be held. Memorials and condolences may be sent in care of Gillette Memorial Chapel 210 West 5th Street, Gillette, WY 82716. Condolences may also be expressed at www.gillettememorialchapel.com

To order memorial trees or send flowers to the family in memory of Donna May Hotchkiss, please visit our flower store.