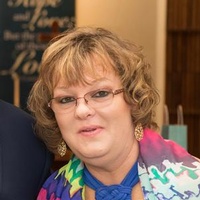 A gathering of family and friends of Donna Hofmeister will be at 1:00 p.m., Wednesday, April 24, 2019 at First Presbyterian Church, Gillette, WY. Donna Lea Hofmeister passed away on April 15, 2019 of unknown causes. She was born on September 13, 1967 in Helena, Montana to Ray and Jean Hofmeister. When she was younger she moved around with her family, from Helena to South Dakota then to Wyoming. Donna attended Campbell County High School up until she got pregnant. She married Jim Petersen in 1985 and shortly after they were married, they welcomed their son Allen Petersen in December of 1985. In 1988, Donna and her family moved to Howard, South Dakota, where she worked at PBM until 1999. The following year Donna and Jim divorced while they lived in Carthage, South Dakota. Donna continued to live in Carthage where she met Daryl Forthman in 2003, three years later in 2006 she started at the Good Samaritan where she dedicated 10 years as a CNA, which was a job that she had great pride in. Donna became a grandmother to Blake Allen Petersen in April of 2008, she loved her grandson with all of her being and would light up whenever she could see him.  In 2016 Daryl passed away and she continued to live in Carthage for 6 months before she moved back to Gillette, Wyoming to live closer to her family. In 2017, she met a dear friend named Chad Wiitala, they went on road trips together, enjoyed spending time together and doing various activities. In November 2018 her son and his wife became foster parents, Donna became a grandmother again their two kids, as was so excited to spoil them. Donna was a kind and caring woman with a gentle heart that loved her son with all of her heart. She was extremely proud of her only son and all of the accomplishments he had achieved. People remember her as having a smile that would light up the room, a laugh that was contagious and she was always willing to lend a hand. She was very fond of Chinese and Mexican food, all genres of music, fishing, deer hunting, growing plants and flowers, working in her yard and putting yard decorations up. She loved being around kids and spoiling them rotten, it brought great joy to her. Donna is survived by her son, Allen Petersen and wife Alicia; grandson, Blake Petersen, foster grandkids Aaliyah and Ja’marr, her brothers, John Hofmeister, Shawn Hofmeister and wife Valorie, nieces and nephews, Tierney, Mikayla, Brodee Hofmeister, Clayton Hofmeister, and numerous aunts, uncles and other family members. Donna was preceded in death by all of her grandparents, her parents Jean and Ray Hofmeister, long-time partner Daryl Forthman, some aunts and uncles. Memorials and condolences may be sent in care of Gillette Memorial Chapel 210 West 5th Street, Gillette, WY 82716. Condolences may also be expressed at www.gillettememorialchapel.com

To order memorial trees or send flowers to the family in memory of Donna Lea Hofmeister, please visit our flower store.