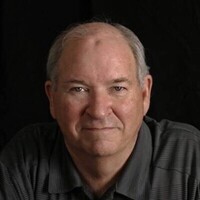 Donald Francis Schmidt, 75, passed away peacefully on February 5, 2021 of natural causes. Donald was born on October 1, 1945 in Seneca, KS to Laurence and Nell Schmidt. He grew up on a farm west of Sabetha, KS. He moved to Harlan, IA in 1958 when he was 12 years old.  Donald graduated Harlan High School in 1963 and started working for the Harlan Newspaper.  He joined the United States Air Force in 1966 and was in communications. His favorite time in the USAF was when he was stationed at Elmendorf AFB in Anchorage, Alaska where he also earned his pilot’s license to fly. He moved to Gillette, WY in 1971 where he soon became part owner of the News Record. He then opened Schmidt Shoe Store and was a realtor, journalist, and photographer. Donald was a kind and gentle spirit.  He had the biggest heart and a great sense of humor. He had a love for the outdoors and nature, and enjoyed golf, flying his airplanes, and photography. He is survived by his wife, Kathleen Schmidt of Gillette, WY; siblings, Gene Schmidt of Harlan, IA; Janiece (Tom) Rau of Shelby, IA; and Larry (Marilyn) Schmidt of Blaine, MN; son, Dustin Schmidt of Gillette, WY; daughter, Nickole (Chadwick) Schickel of Tucson, AZ; and stepdaughter, Hayley (Steve) Dorris of Medford, OR as well as seven grandchildren; Keldon and Sydnee Schmidt, Maddison, Logynn, and Bayli Schickel, Gavin and Dakota Patterson, and one great grandson; Emmitt Kingsbury. He is preceded in death by his parents Laurence and Nell Schmidt; sister-in-law Betty Schmidt; and nephew Steven Schmidt. Memorials may be made in Donald’s name to benefit Hospice of Campbell County. Memorials and condolences may be sent in care of Gillette Memorial Chapel 210 West 5th Street, Gillette, WY 82716. Condolences may also be expressed at www.gillettememorialchapel.com

To order memorial trees or send flowers to the family in memory of Donald Francis Schmidt, please visit our flower store.