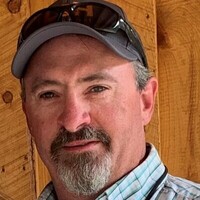 A celebration of life for Donald Garges Dickson will be at 10:00 am on Friday, January 15, 2021 at Family Life Church with Pastor Marty Crump officiating; interment will take place at 1:00 pm on Friday, January 15, 2021 at Mt. Pisgah Cemetery. Visitation will be held from 4-7 pm, Thursday, January 14, 2021 at Gillette Memorial Chapel. Don Dickson, age 51, of Gillette, entered into heaven Wednesday, January 6, 2021, his wife and brother were at his side. Don was born on September 3, 1969, in Sheridan, WY, the youngest child of Eva Jane (Dunn) and Chester Charles Dickson, Sr. Don was educated at Highland Park and Holy Name Catholic School, Central Junior High, graduating from Sheridan High School in 1988. Post-secondary, he attended Sheridan College studying diesel mechanics. He spent several years in Colorado before settling in Gillette where he worked for his brother Chet at TruGreen, then was employed at Nelson Brothers on the blasting crew. Around 2003 Don started his career at Cordero Rojo where he held many different positions ending as a pit mechanic. While at the mine he was a member of the EMRT team for the A crew. Don formed many friendships on the A and D crews which he considered his work family. In January of 2006 Don met Stacey Nannemann; they were married June 9, 2006 in Gillette.

At this time Don entered his role as a father to Stacey’s two children, Tavia and Skyler. Joining the family a few years later were sons Daniel and Dylan. Don’s ultimate joy was being a Papa to grandsons Emmett and Cort. He was most relaxed in the mountains, at the family cabin near Hazelton Peak, riding UTV’s, exploring and fishing with his sons. While growing up Don enjoyed fishing and hunting in the Big Horn mountains above Sheridan.  Don loved the water and enjoyed taking the boat to various lakes around WY and SD. Together the family made many memories with annual spring-break trips to the southwest coast of FL. Family was important to Don, and he often took advantage of his time traveling to work to call his Dad, siblings and nephews. He was a great brother that valued his connection with his siblings. Don cherished watching his boys in their sports activities. As a devoted husband, Don loved and cherished his wife by spending much of his spare time spoiling her by doing shopping, cooking, household chores and delighted in doing so. Mechanics was a passion of Don’s in research and practice of repairing vehicles and small engines. He thrived in the challenge of figuring out a solution to a problem that most anyone would present to him, including searching for the best deal. Don had a deep interest in history and didn’t hesitate to share his knowledge with anyone willing to listen.  Most important in Don’s life was his relationship with his Savior, Jesus Christ, through prayer, reading his Bible and daily devotional; he was a faithful servant. He is survived by his wife, Stacey; children Daniel and Dylan, Tavia (Lane) Nielsen, Skyler Skaggs; grandsons Emmett and Cort Nielsen, all of Gillette; father, Chester (Carla) Dickson of Sheridan; brother Chet (Lisa) Dickson of Buffalo; sister Irene (Charlie) Case of Sheridan; in-laws Gayle (Kay) Nannemann, Scott (Cathy) Nannemann, Cory (Laurin) Nannemann, Genae (Davian) Herbig, Trent (Heidi) Nannemann; numerous aunts, uncles, cousins, nieces, nephews, extended family and friends. He was preceded in death by, mother Jane (Dunn) Dickson and mother-in-law Ginny (Barbour) Nannemann. In lieu of flowers the family asks that memorials be made to assist the Dickson family with future expenses. Memorials and condolences may be sent in care of Gillette Memorial Chapel 210 West 5th Street, Gillette, WY 82716. Condolences may also be expressed at www.gillettememorialchapel.com

To order memorial trees or send flowers to the family in memory of Donald Garges Dickson, please visit our flower store.