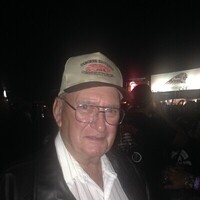 Dennis (“Denny”) Gene Michael Henle was born on October 1, 1941 in Murdo, South Dakota, one of three children to George and Gladys (McIver) Henle.  Denny was raised on the family ranch south of Draper, SD, and after completing 8th Grade at Jones County Public Schools began working on the ranch from sunup to sundown.  From cattle to combines, and from wheat and oats to bailing hay, the many tasks that come with a working farm and ranch were seemingly never-ending.

Denny married Trudy King when he was 19 years old on November 10th, 1960.  Nine months from that date, the first of three children, Camela (Cammy) Henle, was born.  The following year, Dennis moved his family to Wyoming and began his career in road construction, building the highways and interstates we travel through Wyoming and northern Colorado.

In 1963, the second child arrived (Wayne Henle), followed by another son in 1965 (Daren Henle).  By 1974, the family had relocated to Gillette, where Dennis decided to settle down and buy some property that could accommodate a large garden and a place to process meat (which was a long-standing family affair).  Settling in Gillette satisfied many of the family’s needs, as the children were tiring of moving so often, and bouncing from one school to another.

Once in Gillette, Dennis found work building coal mines and mobile home parks around the area for multiple contractors, where he Supervised most of the jobs.  Denny could operate any piece of heavy equipment you could find, and he was considered one of the best finish-blade operators in the state.

Dennis continued to work for Osborne Brothers and eventually retired from Earth Work Solutions when reached 70.  He was an avid hunter and fisherman who loved camping, bonfires, and ribs & steaks on the grill, since his favorite pastime was smoking meats, treats, and goodies of all kinds for all to enjoy.

After his wife passed in 2013, Dennis stayed active, camping and fishing, smoking meats until he was unable to get around.  Eventually he had to have 24/7 in-home care until his passing on July 22nd, 2022, at the age of 80.  Throughout his life, Dennis remained a diligent worker, a self-taught guitarist, a life-long NRA member, and an inspiration to many family members and friends.

Dennis is survived by his children Camela (Greg Welch) Henle and Wayne Henle, of Gillette; brother, Darrell Henle of Stevensville, MT; sister, Cheryl (Tom) Paige of Brookings, SD, and many extended family members.  He was preceded in death by his parents, wife Trudy, and son Daren.

The family wishes to extend their personal thanks to Dennis’ caregivers: Darcy, Haynie, Bobbie Kinsinger, Brittney Meier-King, and Jodi Benjamin.

Funeral services for Dennis will be conducted at Gillette Memorial Chapel on Friday, August 5, 2022 beginning with visitation at 10am, formal services starting at 11am, and a graveside committal at Mt. Pisgah Cemetery to immediately follow.  The Henle family wishes to invite all attendees for a time of fellowship at the Mt. Pisgah pavilion after the graveside committal. Memorials and condolences may also be sent in care of Gillette Memorial Chapel at 210 W. 5th St, Gillette, WY, 82716. Condolences may also be expressed at www.gillettememorialchapel.com

To order memorial trees or send flowers to the family in memory of Dennis Gene Michael Henle, please visit our flower store.