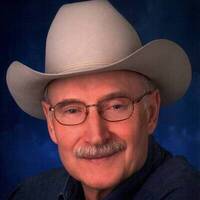 Spike was born September 14, 1934, to Erman E. and Lulu M. (Gibson) Hladky in Gillette, WY. He was raised on a ranch six miles north of Gillette.  As a young teenager he broke horses, performed day-work for local ranchers, and worked on the family ranch.  He attended school in Gillette and graduated from Campbell County High School in 1953. He played football, basketball, and track.  He was state champion in hurdles and held the state record.  That same year he married his high school sweetheart, Margaret Ann Mooney.

After high school he worked for Gulf Oil Company on a seismograph crew in Wyoming, Colorado, and Montana.  Spike and Margaret Ann returned to Gillette where Spike worked for Pearson Oil, Fulkerson Oil, and McCann Motors before starting work as Campbell County undersheriff in 1962.  In 1966, he resigned from his position and filed for sheriff.  He worked at Coulter Construction during the day and campaigned at night. He financed his entire campaign on a loan from his life insurance policy, support from family members, and a $10 donation.  He won the election and worked for the Durham Buffalo Ranch until taking office in January 1967.  He served five terms as sheriff, making him the longest running sheriff in Campbell County history.

During his tenure as sheriff, the county experienced tremendous growth.  Spike transformed the department from two officers to 95 employees and a budget of $25,000 to $1.9 million.  He also oversaw the move to two new courthouses.  The first was completed in 1971 and the second in 1985.  Spike spent nearly 5 years in the planning, preparation, and construction of the facility that still serves the community.  He organized the Campbell County Sheriff’s Posse which provided search and rescue and other support to the department and community.

Spike attended numerous law enforcement schools totaling over 2,000 hours and completed an associate degree in criminal justice. He was one of the first to become a certified polygraph examiner in the State of Wyoming, and graduated from the F.B.I. Academy at Quantico, Virginia in 1971.

After his tenure as sheriff and beginning in 1987, Spike became a licensed insurance agent.  Spike and Margaret Ann owned and operated the Hladky Agency for Farmers Insurance Group until retiring in 2008. During retirement, Spike worked at the family ranch and spent winters in Nevada enjoying the sunshine and slot machines. Spike enjoyed hunting, fishing, camping, horses, and ranching.

Spike’s true love was his family.  Before Margaret Ann passed away, they shared 68 years of marriage and had three daughters: Linda, Lori, and Karen. From the time he first married Margaret Ann, he was involved in the operation of the beloved family ranch.  He supported his daughters, grandchildren, and great-grandchildren in every aspect of their lives.  He instilled in each of them an appreciation for hard-work, perseverance, and education, as well as a love of ranching, fishing, camping, and for many hunting. His children and grandchildren described him as a man of integrity, honesty, and compassion. He was a leader, mentor, and a bit of a legend, not only to his family but to many of the men and woman he hired and served in the community. Spike was organized and was known for having things accomplished the right way which happened to be “Spike’s way”.

Spike is preceded in death by his wife Margaret Ann Hladky, his parents, and his siblings Robert, Clifford, and Audrey Hladky.

Expressions of sympathy in Spike’s memory may be made to the D.B “Spike” Hladky Memorial Fund to benefit the Campbell County Sheriff’s Office K9 Program. Memorials and condolences may be sent in care of Gillette Memorial Chapel, 210 West 5th Street, Gillette, WY 82716.  Condolences may also be expressed at www.gillettememorialchapel.com.

To order memorial trees or send flowers to the family in memory of Delano "Spike" Hladky, please visit our flower store.