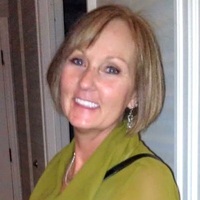 Mass of Christian Burial for Debra Lawrence will be held at 11:00 a.m., Saturday, March 27, 2021at St. Matthew's Catholic Church, with Father Cliff Jacobson officiating. Visitation will take place from 5:00 p.m. to 7:00 p.m. with Vigil to follow on Friday, March 26, 2021 at Gillette Memorial Chapel. Debby Anne (Cahill) Lawrence was born on March 3, 1957, in Milwaukee, WI. She was the second child to Edward George Cahill and Katherine Lyon Cahill. She moved with her mother, father, and sister to Convent Station, NJ where she attended Bayley-Ellard High School and graduated in 1975. She then attended the University of Scranton where she met the love of her life, Joseph J. Lawrence. She graduated with her Bachelor’s of Art in English in 1979 and she and Joe married on October 18, 1980, in Woodbury, NJ at St. Patrick’s Catholic Church. The two were blessed with their first child, Joseph Ryan, on October 16, 1982. Because of his duties with the Air Force, the family of three moved to Oklahoma City, OK where Jamie Marie was born on February 25, 1984, and Edward Andrew on September 30, 1985. Debby was an amazing mother. She loved her children with her whole heart and encouraged them every time they undertook a new endeavor. She always wanted the best for her kids and actively helped them achieve their fullest potential. She did this with logic, love, and quite a bit of humor. She understood Joe Ryan and encouraged him to follow his passions. she packed Jamie to soccer camps around the U.S. every summer. She drove Eddie around the country so he could pursue his love of dancing. She even usually tolerated her son-in-law, Carl Matson. Her legacy will live on through Joe, Jamie, and Eddie’s pursuit of happiness. She was a strong woman who survived a cancer diagnosis that resulted in chemo and radiation treatment that often left her weak and sick. She fought through it and was there to witness the birth of both of her grandchildren, McKenna and Maddox Matson. She loved spending time with her grandkids, often reading to them, and playing games with them on her tablet. Her husband Joe was absolutely the love of her life. They complimented each other in every way and set an example for all who met and spent time with them. Debby loved traveling with Joe and the two had many international adventures together. Debby and Joe also loved traveling with family and friends, especially Debby’s older sister, Kathy Leslie, and her husband, Bud Leslie. Debby was the self-designated trip-planner for all her friends and family and planned each one down to the most interesting, often hilarious, detail. Debby was generous. She gave her time and money to causes that she held near and dear and especially enjoyed helping at St. Matthews Catholic Church. Her generosity extended around the community, the state, the country, and oftentimes, the world. She made friends easily and could talk to anyone, anywhere (much to the chagrin of her children and husband). She never met a stranger and brought everyone into her light, bonding with people instantaneously. She is survived by her husband of 40 years, Dr. Joseph J. Lawrence, her children, Joseph R. Lawrence, Jamie M. Matson (Carl Matson), Edward A. Lawrence, grandchildren McKenna Cahill, and Maddox Carl Matson, her sister Kathleen Leslie (Frank Leslie), and many nieces, nephews, cousins, and uncles. Memorials and condolences may be sent in care of Gillette Memorial Chapel 210 West 5th Street, Gillette, WY 82716. Condolences may also be expressed at www.gillettememorialchapel.com

To order memorial trees or send flowers to the family in memory of Debra Anne Lawrence, please visit our flower store.