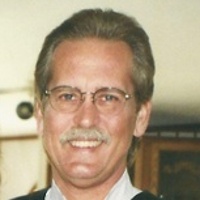 David Eugene Barlow of Gillette, WY, passed away in his home on June 9, 2019, at the age of 65.  David was born in Des Moines, Iowa on July 27, 1953.  His parents were Merrill M. Barlow II and Nada Ruth (Waskowiak) Barlow.  From high school, David enlisted in the U.S. Navy during the Vietnam Era.   He was honorably discharged after serving as a Radio Operator.  Moving on to civilian life, David was a Disc Jockey in Pawhuska, OK before returning to Dallas.  He then began a 47 year career in the manufacturing and mining industry, first with Ingersoll-Rand (30 years), then with Cate Equipment/Atlas Copco/Epiroc (17 years), retiring as Parts Manager at Epiroc in Gillette, WY in March 2019.  David married his wife Lori (Boeck) in November of 1993, and they moved to Gillette, WY in 2001.  David and Lori were married for over 25 years.

David held himself to a high ethical and moral standard, practicing with integrity without being judgmental of others.  Always able to see the humorous side of life, he could tell jokes or improvise on the spot.  He was an outdoors-man and preferred the small town life.  Camping, hunting, fishing, pets, and critters were the focus of David and Lori’s zest for life in Wyoming.  When it came time to go to the big city, it would be for an event such as a Joe Bonamassa concert.  He loved music, and took up the guitar at age 62 because of his Bonamassa influence. Family was very important to David throughout his life.  He loved to visit, be visited, or get updated on the phone.  He was always ready to host, fixing an awesome brisket or some reward from a hunt.  David will be remembered as a loving husband and father, as well as a caring and loyal friend.

David is preceded in death by his parents; mother-in-law Betty Boeck, and father-in-law Jack Boeck.  He is survived by his wife, Lori; siblings, Dalene Green of Omaha, NE; Merrill M. Barlow III (Sandra) of Omaha, NE; Merri Lynn Greenwood of Coppell, TX; four children, Michelle (Marc) Dickens, of Austin, TX; David Allen Barlow of Garland, TX; Shawn Barlow of Rockwall, TX; and Daniel (Kelsie) Barlow of Tulsa, OK; one granddaughter, Ava Dickens and one grandchild in development, which he was informed of, days before passing; brothers-in-law John Boeck and Greg Boeck; and a multitude of nieces, nephews, and dear friends.

A memorial brick will be placed in Lasting Legacy Park, Gillette, WY in honor of David’s military service.

Interment and military memorial service will be held at a later date, at the Iowa Veterans Cemetery in Adel, IA. In lieu of flowers, the family request that memorials be made in David’s name to benefit the American Heart Association.  Memorials and condolences may be sent in care of Walker Funeral Home 410 Medical Arts Court, Gillette, WY 82716. Condolences may also be expressed at www.walkerfuneralgillette.com

To order memorial trees or send flowers to the family in memory of David Eugene Barlow, please visit our flower store.