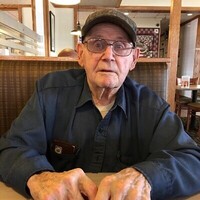 Memorial service for Darrel Byford will be Friday, July 31, 2020 at 10:00 a.m. at Westside Baptist Church in Gillette, Wyoming with Pastor Scott Thompson officiating. Inurnment to follow at Mt. Pisgah Cemetery in Gillette, Wyoming where he will be laid to rest next to his wife, Fondalene.  Darrel Byford, age 93, passed away on July 16, 2020 at the Legacy Living and Rehabilitation Center in Gillette, Wyoming. Darrel was born on November 4, 1926 to Virgil and Lena Byford in Calvin, Illinois.  He is preceded in death by his wife, Fondalene, and mother and father, brother, Donald and sister, Doris Ann. Darrel married Fondalene Roby on June 18, 1948 in Illinois.  They had been married 65 years before Fondalene passed away.  They had a son, Virgil Franklin, a daughter, Donna Sue and a daughter, Juanita Louise. He moved his family from Illinois to Roundup, Montana in 1949, to work with his brother Don in Don’s water hauling business.  He worked for Getter Trucking for approximately 30 years as a truck driver and parts manager.  He took a break from truck driving in 1963 to buy and run the Log Cabin Café in Choteau, Montana.  That lasted until 1966, when he sold the café and went back to Getter Trucking.  In 1967, he then moved his family to Gillette, Wyoming to work in the oil field boom.  When he retired, he started his own business - “Chop’s Small Engine Repair”.  He fixed lawn mowers, chain saws, snow blowers and anything with a small engine.  He was active in church.  He loved to sing, play piano, organ and guitar. He was an excellent mechanic and helped many friends and family fix their vehicles. Darrel is survived by his son, Virgil (Marge) Byford; granddaughter, Sheri Byford; granddaughter, Julie (Frank) Grundmeier and their son, Parker; daughter, Donna Grams; grandson Gary (Jennifer) Grams, and their sons, Zach and Nick; daughter, Juanita (Eugene) Routledge; granddaughter, Ame and her daughter, Faith; granddaughter, Wendi (Jose) Canchola; grandson, Sandy Routledge; and grandson, Erik Routledge. Memorials may be made in Darrel’s name to benefit the Westside Baptist Church. Memorials and condolences may be sent in care of Gillette Memorial Chapel 210 West 5th Street, Gillette, WY 82716. Condolences may also be expressed at www.gillettememorialchapel.com

To order memorial trees or send flowers to the family in memory of Darrel L. Byford, please visit our flower store.