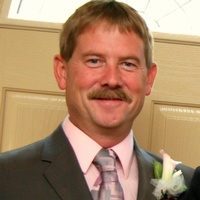 Memorial Service to celebrate the life of Darcy Remington will be held at 11:00 a.m., Friday, August 3, 2018 at the Upton Community Center. Darcy Remington age 56 passed Thursday, July 26, 2018 at his home in Upton, WY from causes that are pending autopsy results. Darcy Dean Remington was born January 17, 1962 in Rapid City, South Dakota. He was the fourth son of five to Leslie Darrow Remington and Shirley (Blake) Remington. Darcy was an adventure-seeking boy that continued to be an adventure seeking man. He graduated from Sturgis High School and went to work in Gillette at the Holiday Inn as a cook. He then moved to Upton where he went to work at American Colloid Company. Darcy was a hardworking man all of his life. He went on to receive a plaque for being a great operator at Peabody Mine. Darcy and Mickie also ran a business at the Sturgis Rally for 21 years preparing food at the Day’s End Campground and later bought Remy’s Diner in 2001. Darcy married Mickie (Billings) Remington on October 13, 1984. They owned a house and land outside of Upton where they raised their four adventure-seeking boys. Darcy loved anything that scared him. He enjoyed his Harley-Davidson Heritage Softail, snowmobiles, dirt bikes, and classic cars. He had a kid like joy at the sight of fireworks. He loved the Sturgis Rally and was always sure to get his rally shirt. Darcy loved bowling. He scored many 300 games and earned a roomful of trophies for his talent.  He loved snowmobiling in the mountains, dying Easter eggs, camping, eating great food slowly to enjoy the taste, shooting off fireworks on every holiday (whether he should have been or not). He loved shooting the breeze with people. He was at every sporting event for his kids and if he wasn’t he was busy working hard for his family. He never missed a day of work. He was a jack of all trades and could fix and build anything. He was the best at giving gifts. His biggest prides were his sons which he bragged about all of the time and then his grandkids which he also was sure to brag about when you would talk to him. Darcy is survived by his four sons, Emmanuel (Brenna) Chafee; Ryan (Morgan) Remington; Jeremy Remington; A.J. Remington; his mother, Shirley Remington; his three brothers, Rick Remington; Corey (Judy) Remington; Scott (Marcie) Remington; and his grandkids Talen Remington, Kollins Remington, Ace Remington, Noella Chafee, and many nieces and nephews and family that love him. He is preceded in death by his grandparents; father, Leslie Darrow Remington; his daughter, Marcie Remington; his grandsons, Ein and Owen Remington; and his brother, Leslie Remington. Memorials and condolences may be sent in care of Gillette Memorial Chapel 210 West 5th Street, Gillette, WY 82716. Condolences may also be expressed at www.gillettememorialchapel.com

To order memorial trees or send flowers to the family in memory of Darcy Dean Remington, please visit our flower store.