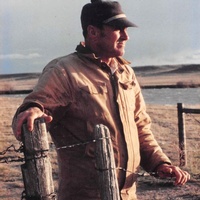 Memorial service for Dan Tracy will be held at 11:00 a.m., Wednesday, November 14, 2018 at Wright Community Center (Old Town Hall), Wright, WY. Dan Tracy age 80, died on the ranch doing what he loved on Wednesday November 7, 2018 of natural causes. Daniel Eugene Tracy 80, was born on December 17, 1937 in Eaton, Colorado to William Patrick Tracy and Opha Lenora (Hendrickson) Tracy at the clinic, he was raised at the homestead on the prairie. His brothers were Bill, Jim, Rich, Ray and Tim. His sisters were Kathleen, Vera, Evelyn, and Opha. Dan married Joyce Ann McKay on April 14, 1957 at the Galeton Community Church. He worked doing construction for a short time but then bought milk cows and milked on the farm where Joyce grew up. He milked cows for 20 years. In the meantime, he farmed near Galeton, CO, ranched near Waldon, CO, and then near Carr, CO for 17 years where he raised sheep, cattle, and horses. Dan and Joyce had three daughters, Jami Alwin, Jody Wilker, and Jacci Tracy and one son, Marc. His ultimate goal was to ranch, so he and his family bought a ranch near Wright, WY in 1993. Dan’s legacy is that you must accomplish something towards your goal every day, you can learn something from everyone you meet and don’t take a butt chewin’ personally. Dan is survived by his wife, Joyce of Wright, WY; children, Jami and Clay of FT. Morgan; Jacci of Wright, and Marc and Tami of Newcastle; along with seven grandchildren and eight great-grandkids. He is preceded in death by his daughter, Jody Wilker who passed away in 2000. In lieu of flowers the family request that memorials be made in Dan’s name to Wounded Warrior Project. Memorials and condolences may be sent in care of Gillette Memorial Chapel 210 West 5th Street, Gillette, WY 82716. Condolences may also be expressed at www.gillettememorialchapel.com

To order memorial trees or send flowers to the family in memory of Daniel Eugene Tracy, please visit our flower store.