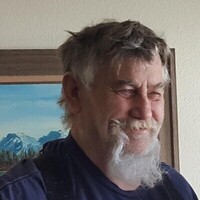 Funeral service for Daniel “Dan” Jordan will be held at 2:00 p.m., Tuesday, April 6, 2021 at Gillette Memorial Chapel; interment to follow at Mt. Pisgah Cemetery. Visitation will be held from 4:00 p.m., Monday, April 5, 2021 at Walker Funeral Home. Daniel "Dan" Robert Jordan, 62 years old, passed away on March 31, 2021 in Casper, Wyoming at the Wyoming Medical Center after a long battle with kidney and heart disease.  He was born in Miles City, Montana on January 14, 1959 and he spent his childhood years in southeastern Montana. As a teenager, Dan worked on a beet truck at his beloved Uncle Tommy George's farm, where he learned the value of hard work and the pleasures of catfishing on the Yellowstone River.  He earned his GED through Job Corps in Montana.  He moved to Gillette in 1977 where he met his wife and started a family.  His unwavering work ethic, first learned on the farm, undoubtedly helped him throughout his 36 years in the oil patch. Dan enjoyed gardening, fishing, watching football, and spending time with his three grandchildren. The kids in his daughter's daycare affectionately called him Grandpa, and his family and friends knew he would do anything for them. He is preceded in death by his mother, Violet, his father, David, and his mother-in-law, Ruth (Delbert). He is survived by his wife and companion of 44 years, Vonda, 62, his son, Tye (Ryan) 41, his daughter, Danielle Jordan-Briney (David), 39, and his three grandchildren, Jordan, Isabelle, and Londyn.  He also leaves behind his brothers Matthew, Bill, and John; his half-sister Shemeya; his nephews Mac, Zac, and Michael; and his nieces Nicole, Danita, Tara, and Jesse. Memorials and condolences may be sent in care of Gillette Memorial Chapel 210 West 5th Street, Gillette, WY 82716. Condolences may also be expressed at www.gillettememorialchapel.com

To order memorial trees or send flowers to the family in memory of Daniel Robert Jordan, please visit our flower store.