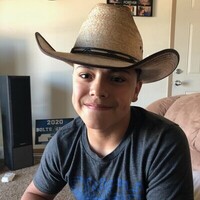 Mass of Christian Burial for Daniel Ahlers will be held at 2:00 p.m., Saturday, June 13, 2020 at Gillette Memorial Chapel with Father Cliff Jacobson officiating. Visitation will take place from 4:00 p.m. to 7:00 p.m., Friday, June 12, 2020 at Walker Funeral Home; vigil to begin at 7:00 p.m. Daniel Ahlers age 14 passed away on June 6, 2020 from a vehicle accident. Daniel Roger Ahlers was born on October 29, 2005 in Gillette, Wyoming to Elizabeth (Apodaca) and Benjiman Ahlers Sr. Daniel attended school in Gillette and Warner, South Dakota. The family returned to Gillette in 2017 and Daniel then attended Sage Valley Jr. High. He was excited to go on to Thunder Basin High School in the fall of 2020. Daniel loved fishing and loved to play with his dogs, Aly and Ginger. With his father and brothers his pastime was video games. Bowling with his brothers and friends was also a great passion. Daniel worked for his uncle Phil and they would spend time together. Hunting for bullfrogs and snakes with his cousin Quentin was a favorite pastime. Daniel loved kicking back and watching quirky cartoons while having long conversations with his stepmom Athena. He enjoyed being mischievous from time to time. A great flirt with the girls.  Daniel participated in numerous sports mostly enjoying football and wrestling. He was always inquisitive asking so many questions and had a fearless approach to life. Daniel was a sweet boy with a contagious smile and wanted to make everyone happy. From his goofy antics to his silly faces never failed to bring cheer to those around him. The world was a brighter place with Daniel in it. He touched the lives of many in his short years and we are all better people for knowing him. Daniel is survived by his mother, Elizabeth Ahlers of Gillette, WY; his father, Benjiman Ahlers Sr. and his wife Athena of Gillette, WY; his siblings, Felicity Valdez, Hector Ahlers, Victoria Brill, Tristin Brill, Robert Brill, Ben Ahlers Jr.  also his best friend, numerous nieces, nephews, cousins and two sets of grandparents. He is preceded in death by his great-grandparents. Memorials and condolences may be sent in care of Gillette Memorial Chapel 210 West 5th Street, Gillette, WY 82716. Condolences may also be expressed at www.gillettememorialchapel.com

To order memorial trees or send flowers to the family in memory of Daniel Roger Ahlers, please visit our flower store.