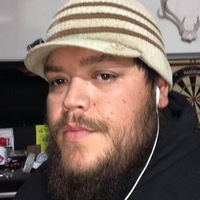 Dallas Wayne Kennedy, 34, of Gillette, passed away unexpectedly of an unknown medical condition Monday, July 25,2022, at his home.

Dallas was born June 23,1988 in Gillette, Wyoming to his loving parents, Brandy Mckee and DeWayne Kennedy. He was the youngest of 4 children: his oldest brother, Micheal Kruckenberg, and 2 sisters: Bambi Smith, and Clarice Stolp. He attended school in Gillette, Wyoming and went on to college to complete his electrician certification. He then was employed as an electrician at Scotts Brothers for 18 years. During that time he met Joleisa Hodges and they welcomed their beautiful daughter, Alexandria Rae Kennedy on August 28 2012.

Dallas enjoyed playing electric guitar in his band Minerva with his friends Colin Vesper, Alex Oliver, Andy Oliver and Steve Skinner, where they competed in "The Battle of the Bands" for 2 years in Colorado and were successful in producing an album. He enjoyed watching football and was an avid fan of the Dallas Cowboys. He rebuilt several guitars, enjoyed fishing, doing puzzles, building huge structures out of matches and craft sticks. He absolutely loved music and seeing his favorite bands. His greatest joy was spending time with his daughter. She was his pride and joy.

Dallas will be deeply missed by his family and everyone he knew. He is survived by his parents: Brandy McKee and DeWayne Kennedy; his siblings: Micheal Kruckenburg, Bambi Smith and Clarice Stolp; daughter, Alexandria Kennedy; multiple aunts, uncles ,cousins, nieces and nephews.

He is preceded in death by his grandparents, Dell and Alice Rubis and Bernard and Cecil Kennedy.

Funeral service will be held on Saturday, August 6, 2022 at 11:00am, at the First Assembly of God church at 601 Carey Ave. Gillette, Wyoming 82716, with Pastor Dan Holden officiating. A luncheon will follow. A special thank you to Dan and Jacque Holden for all their help, support, guidance and love they have expressed with our family.

To order memorial trees or send flowers to the family in memory of Dallas Wayne Kennedy, please visit our flower store.