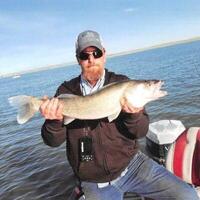 The Celebration of Life Service for Clynton Arthur William Carnahan will be at 2:00 pm on Wednesday, October 13, 2021 at the Eagles Lodge, 210 West 3rd Street, Gillette, Wyoming.   Clynton Arthur William Carnahan was born August 1, 1972 in Frankfurt, Germany to Raymond Carnahan and Elaine (Charlie) Gearhart.  He was raised in Gillette, Wyoming by his mother and stepfather, Bob Gearhart.  He went to school right here in Gillette until the 11th grade.  He had a daughter, Bryanna Veatch with Heather Veatch on July 17, 1990.  He later married Rona Reusser on September 8, 1991.  He and Rona had two children, Timothy Lucas on July 12, 1991 and Tasha Ariel on June 23, 1995.  They later divorced in July of 2002.  He remained a bachelor for the rest of his life though he had many close girlfriends.  He went to the Big Fishing Hole in the Sky on October 5, 2021.

He held many jobs, from pizza delivery/manager to installing appliances.  He finally found his calling when went to work at Thunder Basin Ford in September 2014.  He started on the rack and the last two years he was in parts.  He also managed Rolling Hills Mobile Home Park from August 1, 2020 until present.

His hobbies included playing darts and fishing.  The last five years have been fishing every weekend.  We learned not to bother him on the weekends all year long.  There wasn’t much he couldn’t do from working on computers to mechanicing, including helping his dad with his corvette, which eventually would have been his

To order memorial trees or send flowers to the family in memory of Clynton Arthur Carnahan, please visit our flower store.