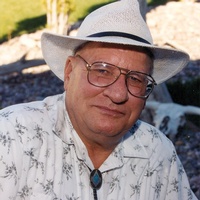 Clifton James “Clif” Ritchie age 84, passed away on October 8, 2018 at Close to Home Hospice. Clifton James Ritchie was born on February 25, 1934 in Sheridan, WY to Carrie (Watt) and Clark Ritchie. Clif’s parents both homesteaded in Sheridan County in the early 1900’s.  Clif grew up on the family ranch and went to grade school until he got into high school.  He then lived in boarding homes in Sheridan and then graduated High School in 1953.  After graduation he worked for the Highway department until he reached the age of 25 to join the Highway Patrol.  During this time period he married Jeanne Grubb and they had their son Tracy Lane Ritchie in 1956 and later divorced.  He started his career with the patrol in Lusk, WY in 1959; continued in Rawlins, and ended up in Gillette.  Married Rochelle Christensen Harrod in 1966, they later divorced in 1996.  They moved to Dubois in 1971 where he was the first Highway Patrolman ever stationed there.  Clif was promoted to Sergeant in 1974 and moved back to Gillette until he was promoted to Lieutenant in 1983 and moved to Cheyenne.  He retired from the Highway Patrol in 1987 and went to work for the Department of Revenue.  He then moved back to Gillette and went to work for the Department of Transportation in 1995.

In 1976, Clif received Police Officer of the year award for going over and above the line of duty to help people.  He would often bring home people from accidents that had relatives in the hospital to stay with his family until the other family members were released from the hospital.  And often times these people would remain life longs friends.

Clif belonged to the Masonic Lodge and the Shriner’s for over 50 years.  He was also an Associate Guardian for Job’s Daughters.  He was a lifelong member of the Trucker’s Association.  He belonged to the NRA.  He enjoyed going on two Tiger cruises with his step-son Dee Harrod who was in the US Navy.

Clif was an avid lifelong rancher and guided many hunters on his ranch over the years and most of them became lifelong friends.   He was proud of his association with the Kendrick family as he worked for them and was an advocate in trying to get the LX Bar as a state historical site.  He also enjoyed being a volunteer at the National High School Finals Rodeo.

Clif is survived by his brother, William “Bill” Ritchie; daughter-in-law, Jackie Ritchie; step-sons, Kelly (Mary) Riley and Don Dee Harrod; step-daughter, Dalene (Rich) Goetz; grandsons, Kris (Amber) Rathai; Kody(Kristin) Rathai; and  granddaughters, Amanda Goetz and Ashley Coulter and two great grandchildren, Kimber Rathai and Kalvin Rathai. He is preceded in death by both of his parents and his only son, Tracy Ritche and granddaughter, Erica Goetz. The family request that memorials be made in Clif’s name to benefit Close to Home Hospice House of Campbell County. Memorials and condolences may be sent in care of Walker Funeral Home 410 Medical Arts Court, Gillette, WY 82716. Condolences may also be expressed at www.walkerfuneralgillette.com

To order memorial trees or send flowers to the family in memory of Clifton James Ritchie, please visit our flower store.