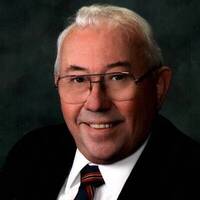 A gathering of Family and Friends for Clifford E. Kirk will be on Thursday, February 10, 2022 from 5:00 to 7:00 p.m. at Walker Funeral Home in Gillette, WY. Clifford “Cliff” Kirk, age 86, passed away on Sunday, February 6, 2022 at Campbell County Memorial Hospital after a short illness. Clifford Eugene Kirk was born on November 18, 1935 to Nann Opal and Clifford Andrew Kirk in Rawlins, WY. He attend school in Rawlins and graduated from Rawlins High School in 1953. Cliff attended the University of Wyoming, Colorado School of Banking and SMU of Texas. He met Geraldine Anselmi in Rock Springs and the couple married June 23, 1957.  Cliff was inducted into the U.S. Army and served from 1958 through 1964. He was honorably discharged, and the family resided in Casper, WY from 1967-1978.  The family moved to Gillette in 1978 and has resided here since. Cliff served as president of the First National Bank for 38 years.  Cliff also served on the Game and Fish Commission and Blue Cross/Blue Shield of Wyoming. His greatest pleasure was spending time with his family. He was preceded in death by his parents, wife and grandsons, Kyle and Benjamin. He is survived by his two sons, Andrew and Kris Kirk both of Gillette, WY. Memorials are suggested to benefit Gillette College Foundation. Memorials and condolences may be sent in care of Gillette Memorial Chapel  210 W. 5th St. Gillette. WY  82716. Condolences may also be expressed at www.gillettememorialchapel.com

To order memorial trees or send flowers to the family in memory of Clifford Eugene Kirk, please visit our flower store.