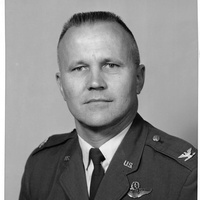 Clarence “Keith” Hutchinson of Gillette, formally of Sheridan, Wyoming died on 10/31/2018 at the Legacy and Rehabilitation Center of complications from Parkinson’s disease. At his request, cremation has taken place and private family services will be held at a later date at the Black Hills National Cemetery Keith was born in Glendive Montana on November 8, 1931 to Clarence Lee and Hildur (Johnnie Johnson) Hutchinson. He was raised in the Loughboro community of eastern Dawson County and attended the local one room country school. He started the first grade in 1936 at age five, completed the first and second grade in one year, and entered Dawson County High School when he was twelve years old. His family moved six miles east to a ranch on Cottonwood Creek in Wibaux County in 1944, but he continued to attend Dawson County schools. He graduated from Dawson County High School in 1948. He enlisted in the Air National Guard at the age of 17, while attending Dawson County Junior College. He earned an Associate of Arts degree in Business Administration in 1950. Keith began a twenty seven year Air Force career when he enlisted in the United States Air Force in August 1950, shortly after the start of the Korean War. He served as a gunner on B-26 light bombers flying low-level night interdiction missions over North Korea. His role aboard the aircraft included flak suppression, firing on trains and trucks as well as aircraft defense. Flying low level at night in the mountainous terrain over North Korea was not a particularly healthy environment conducive to a long life, but he successfully completed fifty six missions and returned to the states in February 1952. After returning to the states, he served as a gunner on B-50 bombers with a nuclear mission, prior to entering aviation cadet training. He was commissioned a second lieutenant in December 1953 and received his Air Force pilot rating in January 1954.

An Air Force commission and pilot’s wings were not the only highlights in Keith’s life during this period. He married his high school sweetheart, Diane Baker of Glendive Montana on December 23, 1953. They shared 57 wonderful years together as they moved to Texas, Nevada, Florida, Georgia, Arizona, Massachusetts, Montana, Alabama, Virginia, Iran, and Oklahoma before settling in Sheridan, Wyoming in 1978. Keith completed fighter weapons training at Nellis AFB in Nevada and served as an instructor pilot in the F-86D all-weather fighter / interceptor schools at Tyndall AFB, Florida and Moody AFB, Georgia. At the time the F-86D was the United States most advanced fighter aircraft. He said every pilot should have been issued one of these planes. It was an absolute joy to fly. In June 1960, he was selected for the Air Force Institute of Technology with a duty station at the University of Arizona at Tucson where he completed degree requirements for a BA in electrical engineering in twenty six months graduating with highest distinction. Keith volunteered and was assigned to the Republic of Vietnam in November 1965 where he served with the 5th Air Commando Squadron. He flew 386 combat missions over South Vietnam in the U-10 aircraft, a short take-off and landing aircraft. The flights were psychological warfare missions in support of US Special Forces, South Vietnamese ground forces and the regular US army. After completing Air Command and Staff College at Maxwell AFB, Alabama, Keith was assigned to the Air Force Technical Applications Center, (AFTAC) with duty stations in both Alexandria, Virginia and Tehran, Iran. AFTAC’s highly classified mission has since been declassified. Its purpose was to detect nuclear detonations anywhere in the world as part of the nuclear test ban treaty. He always considered his assignment to Tehran one of the highlights of his Air Force career. He commanded a small detachment of American servicemen and Iranian nationals at a remote desert location while living with his family in the city of Tehran. He made many Iranian friends while there and often deplored their fate when the mullahs returned to power with their anti-American rhetoric and attempts to drag Iran back into the seventh century.

Upon returning to the United States, he was stationed in Oklahoma City as Commander of the Air Force Engineering and Integration squadron responsible for engineering USAF communications systems for the southern United States. Keith attained the rank of Colonel in the Air Force and retired in July 1977. His military decorations and awards included the Legion of Merit, Distinguished Flying Cross, Meritorious Service Medal with one oak leaf cluster, Air Medal with 14 oak leaf clusters, Air Force Commendation Medal, Air Force Outstanding Unit Award with two oak leaf clusters, Presidential Unit Citation, Good Conduct Medal and the Vietnamese Cross of Gallantry with silver star, and the Ambassador of Peace Medal from South Korea. After retiring from the Air Force, he briefly worked for an oil well servicing company in Oklahoma before moving to Sheridan where he was the personnel and training director at Big Horn Coal from 1978 to 1989. After retiring for the second time, Keith and Diane traveled to Europe, Canada, Alaska, Mexico, Hawaii, Australia, and about the continental United States but were always anxious to return to Sheridan where he maintained a large yard and enjoyed puttering around. He particularly enjoyed family visits, spending time with his children and grandchildren, and anxiously looked forward to annual hunting, horse packing, and fishing trips with his son and daughter in law. He loved being in very remote country and always insisted on getting to the highest ground or peak just so he could take in the view. He was preceded in death by his parents, his wife, Diane Hutchinson; brother, Glenn Hutchinson, and sister, Joyce who died in infancy. He is survived by his children, Debbie Wolf (Frank) of Moorcroft, Wyoming; Vicki Burgess (Fred) of Bailey, Colorado; and Jerry Hutchinson (Gerveann) of Gillette, Wyoming. He is also survived by his grandchildren, Tracy Nemes, of Gillette; Ryan Wolf (Senait); Erin Spatz (Aaron); and Kayla Wolf (Fiancé Jeff), all of Denver, CO and his great grandchildren, Finley and Callum Spatz, and Sienna Wolf. In lieu of flowers, a donation to the Salvation Army, Wounded Warriors, or Parkinson’s Foundation would be appreciated. Memorials and condolences may be sent in care of Walker Funeral Home 410 Medical Arts Court, Gillette, WY 82716. Condolences may also be expressed at www.walkerfuneralgillette.com

To order memorial trees or send flowers to the family in memory of Clarence Keith Hutchinson, please visit our flower store.