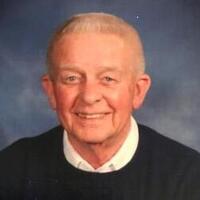 Mass of Christian Burial for Clare Sorheim will be held at 11:00 a.m., Thursday, January 14, 2021 at St. Matthew’s Catholic Church with Father Cliff Jacobson officiating; inurnment to follow at Mt. Pisgah Cemetery with Military Honors provided by American Legion Post #42 Honor Guard. Family gathering and Rosary will be held from 4:00 p.m. to 6:00 p.m., Wednesday, January 13, 2021 at Gillette Memorial Chapel. Clare Maurice Sorheim of Gillette, Wyoming passed away January 2, 2021 at the Legacy Living and Rehabilitation Center of natural causes. He was born to Clarence and Evelyn (Olmsted) Sorheim on August 23, 1935 in Canova, SD. He graduated from high school in Lead, SD, attended the University of South Dakota, served in the United States Air Force and was honorably discharged. While attending USD he met his future wife, Suzanne O’Connor on a blind date. They were married on August 11, 1960. To this union two children were born, Lisa Ann and Mark Steven. Clare was employed by the Wyoming Transportation Department Engineering Division for 40 years, retiring in 1995. On March 13, 2015 he was baptized and entered into the Catholic Church. He was an avid reader and a great source of facts, enjoyed many genres of music and sports. In his younger days he excelled at basketball, golf, baseball and bowling. Clare loved his family especially his grandchildren and great grandchildren. He is survived by his wife of 60 years, daughter, Lisa(Jim) Semler of Gillette; son, Mark(Rachel) of Hobbs, NM; grandchildren Ray(Emily) Catellier, Korie Sorheim, Amanda Sorheim, Joseph Sorheim, Isabelle Sorheim, Gabrielle Rios, Amy(Rob) Neihart, James Semler, 6 great grandchildren, nieces and nephews. He is preceded in death by his parents, sisters Muriel Larsen, Lois Fulk and brother Verne.  Memorials and condolences may be sent in care of Gillette Memorial Chapel 210 West 5th Street, Gillette, WY 82716. Condolences may also be expressed at www.gillettememorialchapel.com

To order memorial trees or send flowers to the family in memory of Clare Maurice Sorheim, please visit our flower store.