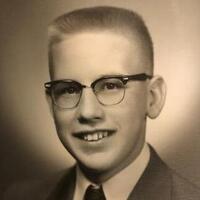 Clair Odell Ohnstad, age 81, of Gillette Wyoming died on October 22, 2021 at the Sheridan VA Medical Center. Clair had spent the last few years slowly battling multiple aliments including Cancer, Alzheimer’s, Dementia and Parkinson’s Disease.  At his request Clair was cremated, and his cremains will be interred at Black Hills National Cemetery at Sturgis, SD. Internment Services, rites, and celebration of life will be delayed allowing family and friends to travel during a more favorable season. Internment will take place on June 6, 2021. All family and friends are invited to attend. More information will be provided in the coming months. Clair was born in 1940 to Clarence Benjamin Ohnstad and Anna Maria "Mary" Aamold Ohnstad in Estelline, SD. Clair was educated in Estelline graduating from Estelline High School in 1957.  He later enlisted in the US NAVY and served as a Navy Corpsman attached to USMC units and as a hospital medic at naval bases in California and at Subic Bay Naval Base in the Philippines. Clair often applied his medical skills in the workplace and was affectionately still called DOC by his coworkers long after his Military service. Clair attended SDSU for a few semesters after his Navy service and then struck out on his own.  He tried Stints in California and Washington returning home to South Dakota where met and married Elaine Slostad of Watertown, SD in 1969. Together they had two children Aaron and Christianna. Together they resided in Egan MN until 1978, and in Gillette WY until 1990.

Employment - Clair worked as a kid at the local grocery and movie theater in Estelline and helped seasonally on family and friends’ farms. Clair tired his hand at many trades in his lifetime, working in, Medical Device Sales, Road Construction, Warehouse Manager, Electrician, Mine Construction, and Commercial Property Management. He almost completed a degree in Business and as a Paralegal. Later in life he was a driver, driving Vans for Railroad crews, a Transit Driver in Everette, WA and a Truck driver for Swift Trucking. Clair left Gillette in 1990 and moved to Washington where he hoped to restart in a new career. This long-term separation led to the eventual divorce between Clair and Elaine though their devotion and dedication to their children and each other never wavered. He lived off and on with his sister Barbara and Brother-in-law Steve in Lynwood WA, and for a number of years he resided in Everett, WA. He later moved about the country residing in California, Torrington, WY, South Carolina, Watertown, SD and returned to Gillette, WY to retire. Clair loved his family dearly, he always looked up to his older Brothers Jim, Jack, Don and Larry for their personal and professional achievements. Clair tried his best to live up to their examples and strove to be a good brother to his younger brother Bob, who he was also very proud of.  He loved his Sisters Barbara and Jeanne dearly and always thought of them not only as sisters, but as surrogate mothers. Clair relished time with his extended family of niece’s nephews and cousins, planning most of his life’s vacations around visiting his family, extended family and old friends. Clair was a lifelong member of the Lutheran church. He was Baptized at Clear Lake, SD in 1942 and was a founding member of Prince of Peace Lutheran in Gillette, WY, where he served on the Church Council and sang in the Choir for 15 years. Clair was an avid sports fan, but especially loved to support local high school athletics especially Football and Boys and Girls Basketball. Clair often traveled with local booster clubs attending out of town games in support of local kids. He even traveled to watch his nephew and niece in college athletics. Clair loved a good movie in the theater and was an avid reader especially of Military and western History and loved discussing and debating it with others. Clair is survived by his Ex-Wife Elaine Ohnstad -Eide, his son Aaron Ohnstad and wife Lisa “Joy”, and daughter Christianna and husband Josh Johnson, brother Robert and wife Nancy Ohnstad, sister Barbara and husband Steve Olsen, and sisters-in-law, Jan Ohnstad, Sandy Ohnstad, Phyllis Ohnstad, and three Grandchildren, Archer, Alice and Adeline. He was preceded in death by, sister Jeanne Ohnstad, his parents, niece Suzanne Olsen Johnson, brothers John "Jack" Ohnstad, Lawrence Ohnstad, and Donald Ohnstad, and Great nephew Isaiah Hunt. Clair was always grateful for all his nieces and nephews who shared their lives, extended family and friends and homes with him over the years. Memorials will be used to plant trees as Clair requested. Memorials and condolences may be sent in care of Walker Funeral Home 410 Medical Arts, Court, Gillette, WY 82716. Condolences may also be expressed at www.walkerfuneralgillette.com Clair asked for no memorial’s but instead to plant trees in his memory.

To order memorial trees or send flowers to the family in memory of Clair Odell Ohnstad, please visit our flower store.