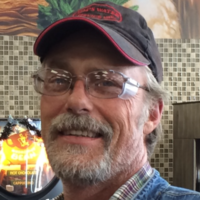 Christian Dean Knigge, Gillette resident, 56, died on Aug 21, 2022 at his home from suicide.
Dean was the first born of Buzz and Kay (Nielsen) Knigge on October 21, 1965 in Jackson Hole, WY.
Dean grew up in Gillette during the oil boom of the 70’s and started his adult life working career with Jim’s Water Service as a truck driver hauling water to the oil rigs. He retired in 2017 after 30 plus years at Jim’s Water. Dean loved Jim Rodgers like a father and the Rodgers’ family took Dean under their wing until his death. DIno was known for practice of handing out bibles and his conviction to spread the word of God to all he knew and met. His persistence and devotion to God is what will be remembered most.
Dean loved hot rod cars, street bikes, driving water trucks, fishing and Jesus. Dean graduated from Campbell County high school in 1984. Dean had one son, David, with Toni Mallak in 1987. Dean later married Michelle Lunen in 1989. He has resided in Gillette, Moorcroft, and Douglas, WY.
Dean is preceded in death by his parents, Buzz Knigge, Kay Knigge, son, David John Knigge and nephew Willy Knigge. He is survived by siblings Lisa Knigge, Scotty Knigge, both of Gillette; Melissa Knigge of Rozet, WY, Jason Paine, of Gilbert, AZ, Damon Flanagan of Casper, WY, stepmother, Mary Knigge of Gillette, two nephews, and four nieces and numerous family members. The family will be having a private burial for Dean and thank you for your loving thoughts and prayers. Card condolences may be sent to Jim’s Water Service, (Knigge Family) 201 Newton Rd, Gillette WY or make donations to the Campbell County Suicide Coalition on behalf of Dean at 2301 S 4J, Gillette, WY 82718. Peace to all.

To order memorial trees or send flowers to the family in memory of Christian Dean Knigge, please visit our flower store.