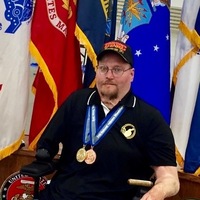 Chris “Junior” Santistevan passed away too soon and unexpectedly on July 19, 2020 surrounded by his loved ones. A memorial service for Chris will be at 10 a.m. Friday, July 31, 2020 at Gillette Memorial Chapel. Burial will follow at The Black Hills National Cemetery at 2:30 p.m. Chris was born in Torrington, Wyoming on October 28, 1974. He was the youngest of 5 to parents Cindy Haas and Jim Santistevan. He graduated from Niobrara High School and immediately joined the United States Marine Corps. He was proud to be a Marine and serve his country; serving 4 years of active duty from 1993-1997. Chris and Sheryl met in 1999. In true Chris fashion, on their first date they went to McDonald’s with two of Sheryl’s daughters. In February 2004, Chris was in a horrific car accident that changed his life forever. Though he spent months and months in the hospital, Chris’ perseverance and strength never faltered. Never leaving his side, Chris and Sheryl married on October 30, 2004 while Chris was still in the hospital. Not to let any obstacle stand in his way, Chris took the challenges he faced head on. He went back to college and earned his associate degree followed by his bachelor's degree in accounting. In 2007 he participated in his first National Veterans Wheelchair games. He looked forward to participating each year and proudly brought home medals every year for the last 12 years in sports ranging from soccer to air rifle. Chris left his mark on all that knew and loved him, making many lifelong connections. He could go anywhere and strike up a conversation with a stranger and end up leaving with a new friend. Chris was an avid hunter. He got his love of hunting from his Grandpa Ernie. His grandpa was a huge part of Chris’ life and was a role model to Chris. By knowing Chris and his nature, it is evident that his grandpa’s easy-going personality rubbed off on Chris. Chris was also a proud grandpa to 8 grandchildren ages 8 to 1. He loved to give them rides in his wheelchair, watch cartoons, play video games and cheer them on at their sporting events. He is survived by his loving wife, Sheryl (Soper); stepchildren Stacy (Tommy) Banks, Brice (Angie) Stanton, Tristin (Tate) Wammen, and Bailey (Ryun) Huber; grandchildren Dayne, Jaxon, Easton, Paxton, Kit, Parker Rebel and Rylan; in-laws David and Joni Brown and Walt and Katy Soper; his parents Cindy (Dan) Haas and Jim (Gail) Santistevan; siblings James, Randi, Jackie, and Mike; aunts and uncles, nieces and nephews, and hundreds of friends. He is preceded in death by his grandma Phoebe Santistevan; grandma Alma Lemons and his grandpa Ernie Lemons. In lieu of flowers, memorials and condolences may be sent in care of Gillette Memorial Chapel 210 West 5th Street, Gillette, WY 82716. Condolences may also be expressed at www.gillettememorialchapel.com

To order memorial trees or send flowers to the family in memory of Chris Alan Santisteven, please visit our flower store.