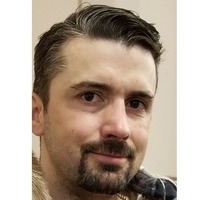 Charles Blake Dietrich passed away July 22, 2021 in Gillette Wyoming. Blake was born to Scott Lee Dietrich and Perrylynne Dietrich September 6, 1978 in St. Anthony, Idaho. The family moved to Jackson, Wyoming in 1979. Perrylynne and Scott later divorced.  Blake attended schools in Jackson from kindergarten through high school and graduated from Western Wyoming High School in 1997.  Perrylynne married Alan Horton who helped raise Blake along with his three boys Jason, Josh and Jarrod. Blake always had a wandering soul. After he graduated from high school he traveled to Idaho, California, Rhode Island, New York, Virginia and Massachusetts. He moved to Gillette in 2006​. He met the love of his life, Audra Smith and from this union came their son, Rio. Audra and Blake divorced but remained close friends raising their son.  Blake worked with heavy equipment, welding and fabrication. Blake completed his college course in Welding at Gillette College. He had a great passion for erudition. He was a collector of many things and enjoyed riding his Harley. He is survived by his mom, Perry Castanon; stepdad, Emilio Castanon; his son, Rio Dietrich and Rio's mom, Audra Smith; numerous Aunts, Uncles, Cousins and his stepbrothers, Jason Horton, Josh Horton and Jarrod Horton. He is preceded in death by his father Scott Dietrich, his stepdad, Alan Horton and Grandparents. Memorials will take place in Gillette, WY and Jackson, WY at a later date. If you or someone you know is struggling with thoughts of suicide, please call the National Suicide Hotline 1 800-273-8255 or Text WYO to 741-741. There is help, there is hope. Memorials and condolences may be sent in care of Gillette Memorial Chapel 210 West 5th Street, Gillette, WY 82716. Condolences may also be expressed at www.gillettememorialchapel.com

To order memorial trees or send flowers to the family in memory of Charles Blake Dietrich, please visit our flower store.