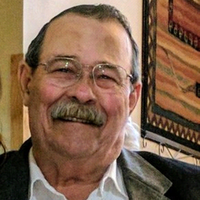 Cecil Van Patten passed away Thursday, July 17th, 2020 at his home in Gillette of a cardiac event.

He was born July 16th, 1943 in Lander to Gilbert and Jane Ann Van Patten. A WY native, Cecil & his four siblings lived on a ranch west of Casper. He graduated from NCHS in Casper. In Sept of 1962 he married Judy (Bower) in Douglas. They resided in Casper where their first daughter, Tracy was born, followed by sons Kelly, Gib and daughter Angela, who were born in Sheridan.

Cecil worked for Ma Bell in Casper, Sheridan, Gillette, and moved to Hulett to be the Service Manager in 1975. He retired from Ma Bell in 1984. While in Hulett, they made many friends & he joined the Masons, becoming a 3rd Degree. He also joined Eastern Star with Judy. Cecil drove the volunteer ambulance for many years. He and Judy were very active in their children’s activities, and later, supported grandchildren’s activities. After leaving Hulett, Cecil & son, Gib joined Kelly as electricians, and worked a year in Southern California at the Marine base. Then they moved back to WY where he worked at gas plants, & became a Superintendent for Elkhorn Construction, retiring in Oct of 2010 (Just in time to go Elk hunting for as long as he wanted).

Cecil lived a full & happy life, with no regrets or complaints. He cherished time spent with family & friends, loved going to Rider baseball games. Hunting & fishing were his life-long passions. His belief was, if you don’t stand for something, you’ll fall for anything. Cecil had a sense of humor under that rough exterior, a heart of gold, love for his family & extended family. He appreciated the last 7 years with his medical family.

He is survived by wife Judy of 57 years, daughter Tracy (Pat, deceased), son Kelly (Michaelyn), son Gib (Jannette), and daughter Angie (Bobby), 13 grandchildren, 10 great grandchildren, 3 brothers, sisters-in-law, brothers-in-law, and many nephews, nieces, and cousins. He also loved his buddy “Tank”. Cecil was preceded in death by his parents, oldest brother, and one son-in-law.

We will miss you “Little Joe” but we know you are at rest in the loving memory of many.

Memorials may be made to benefit the Riders Baseball Program. Condolences may be expressed at walkerfuneralgillette.com or attached to the obituary at gillettenewsrecord.com.

To order memorial trees or send flowers to the family in memory of Cecil Gilbert Van Patten, please visit our flower store.