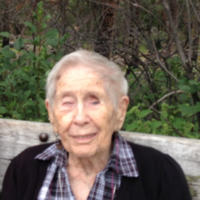 Catherine Pickett joined her grandsons, brothers, and parents in heaven on January 29, 2022 at the age of 97 of natural causes.  A private service have been held in Utah and there will be a tribute in Navajoland in June. Inspiration came in a small bundle to Nelson “Shorty” and Opal (Sheldon) Pickett on July 17, 1924 in Upton, Wyoming.  Catherine was the eldest of eleven children and was born legally blind.  She had numerous eye surgeries as a child and in adulthood, eventually loosing complete sight.  Catherine was raised on the Otis Sheldon homestead (her grandfather’s) and attended country school on the Crook/Weston County line.  Her brother Blaine started school at 5-years-old to walk her to school.  Their close bond lasted their entire lives with Catherine bossing Blaine and he in turn teasing her unmercifully. The family moved to Richmond, Maine in 1934 where she attended regular school until she was to enter high school.  The state of Maine did not have the resources for her continued education and gave her a scholarship to Perkins School for the Blind located in Watertown, Massachusetts.  Perkins School for the Blind was founded in 1829 and the first school for the blind in the United States.  Catherine was able to learn braille, caning, and other life skills to negotiate the trials of blindness.  She was baptized Episcopalian at the school which molded the rest of her life. Upon high school completion Catherine trained at Norwood, MA hospital as a Certified Nurses Aide.  Unable to complete her dream of becoming a nurse she still dedicated her life to helping others. Catherine learned of Father Liebler, an Episcopal priest from Old Greenwich, Connecticut, who established St. Christopher’s Mission in Bluff, Utah in 1943.  She sent letters to him offering her services as a CNA and eventually she joined the close-knit staff at St. Christophers and worked in the clinic. Even though she was legally blind she delivered 257 Navajo babies.  She also defied the odds as a single blind woman and adopted her Navajo daughter Jeanette, who was severely burned in a hogan fire.  After her decades of service to St. Christophers’s; Catherine relocated to Roosevelt, Utah where she was employed by Duschesne School for the Handicap where she was able to be with the babies. Upon her retirement she relocated to St. George, Utah then moved to Upton, Wyoming in 2001 at the age of 77 to be closer to Blaine. Catherine is survived by her daughter, Jeannette Harvey (Blanding, Utah); brothers Orrin Pickett (Newcastle, WY), Richard Pickett (Richmond, ME); sisters Nancy Havens (Dallas/FW TX), Anita Meserve, Clara Trussell (Pittston, ME), and Cora Gardner (Richmond, ME); four grandchildren; 13 great grandchildren; four great-great grandchildren; Elaine and Bill Pridgeon (guardians/niece); and many more nieces/nephews. Catherine was preceded in death by her parents; brothers Blaine Pickett, Donald Pickett, Walter Pickett, and Peter Pickett; two grandsons. Memorials and condolences may be sent in care of Walker Funeral Home 410 Medical Arts Court, Gillette, WY 82716. Condolences may also be expressed at www.walkerfuneralgillette.com

To order memorial trees or send flowers to the family in memory of Catherine Pickett, please visit our flower store.