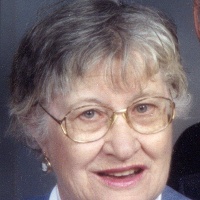 Funeral services for Jane Norman will be held at 11:00 a.m., Saturday, June 22, 2019 at First Presbyterian Church in Moorcroft, WY; interment to follow at Moorcroft Cemetery. Catherine “Jane” Bidwell Norman was born at the family home in Farragut, Iowa on November 15, 1930. Her family called her Jane.  She passed away quietly in her sleep on Friday, June 14, 2019, at Oak Tree Villas in Jefferson City, Missouri. Jane graduated from Natrona County High School in Casper, Wyoming in 1948. After graduation she attended Casper College for two years, majoring in journalism and was editor of the 1949 Casper College yearbook. Jane and three classmates wrote the Casper Teen News for the Casper Tribune under the column called “Saddle Shoes Sessions.” Jane’s pen name was “Doc.” Jane married David Lee Norman in May 1950. After marriage they lived in several oilfield camps including Station 7 located in the Poison Spider area west of Casper, Station 3 near the Ferris Mountains in Carbon County, Wyoming and Bairoil, Wyoming.  In 1967 the family moved to Moorcroft, Wyoming where they lived for the next 50 years. Jane was the Justice of Peace in Moorcroft for Crook County. Later she became the Crook County librarian for the Moorcroft branch library. She said the best part of being a librarian was purchasing thousands of dollars’ worth of new books each year. Jane was an excellent cook. In 1978 she won the Wyoming Chicken Cooking Contest with a pineapple battered fried chicken recipe. Her family enjoyed many delicious meals she prepared. Jane had fond memories of family picnics in the Ferris Mountains and at Devils Tower.  Jane was a great conversationalist and had strong beliefs regarding women’s equal right. She was active in the Phi Beta Kappa sorority in Moorcroft. She was a brilliant bridge player, played golf for several years, did beautiful needlepoint, solved crossword puzzles and always enjoyed reading. Jane is preceded in death by her husband, Dave Norman; her parents Kenneth Oak and Lillian “Hope” (Allen) Bidwell, her sisters Araruth Nihart and Martha Welchans. Jane is survived by her four children: David Lee Norman, Jr. (Marilyn) of Cheyenne, WY; Stephen Mark Norman (Theresa) of Sparks, NV; John Howard Norman (Krista) of Phoenix, AZ; and Mary Catherine “Kate” Norman Corley of Jefferson City, MO. Jane is also survived by twelve grandchildren and seventeen great grandchildren and her brother John Bidwell of Casper, WY. Memorials and condolences may be sent in care of Walker Funeral Home 410 Medical Arts Court, Gillette, WY 82716. Condolences may also be expressed at www.walkerfuneralgillette.com

To order memorial trees or send flowers to the family in memory of Catherine "Jane" Norman, please visit our flower store.