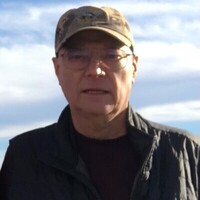 Memorial service for Casey Barnes will be held at 10:00 a.m., Saturday, January 22, 2022 at Gillette Memorial Chapel with Chaplain Gordon Harper officiating. Casey J Barnes age 65, passed away peacefully in his home surrounded by family and friends the afternoon of Tuesday January 11, 2022, after a 3-year battle with cancer.  Casey was born in Hardin, MT August 21, 1956, to Gerald Wayne Barnes and Lola Ann Barnes, Casey was raised in Hardin, Hunting/Fishing and generally adventuring. He graduated Hardin High School in 1974.  Casey then spent several years on the West Coast, surveying with family for a time until joining the Coast Guard at which he excelled at every opportunity.  Returning to Billings, MT he began working at Associated Glass.  Casey was married to the love of his life, Kathy Davis March 1990, and soon adopted Kathy’s two young sons Chris, and Nick. The newly formed family shortly moved to Gillette, WY to help start Associated Glass Gillette, the couple soon retained ownership of the company and had worked together successfully, building their business until the time of his death.  Casey was a diehard fisherman, especially fly fishing and could often be found on the Bighorn River, as well as many other destination fishing locations.  He cared deeply for those around him, often sacrificing his own time and energy to help anyone he could, however he could. He believed success could be had with hard work, a positive attitude and a never give up mentality, which were principles engrained in him as a child.  Casey will be missed by many, for many different reasons.  Casey is preceded in death by his parents Gerald Wayne Barnes and Lola Ann Barnes, many uncles, aunts and relatives.  Casey is survived by Kathryn M. Barnes, his wife of 32 years, Gillette, WY; son Chris (Michelle) Barnes Reno, NV ;  Nick Barnes South Range, MI; granddaughter Maggie Barnes of Gillette, WY; granddaughter Jemma Barnes of Helena, MT; grandsons Tyler (Colleen) Tanner and William Duvall, Reno, NV. Memorials are suggested to be made to benefit the American Cancer Society. Memorials and condolences may be sent in care of Gillette Memorial Chapel 210 West 5th Street, Gillette, WY 82716. Condolences may also be expressed at www.gillettememorialchapel.com

To order memorial trees or send flowers to the family in memory of Casey J. Barnes, please visit our flower store.