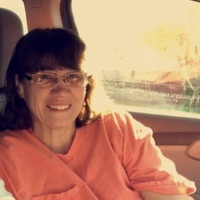 Memorial services for Carrie (Worman) Reed will be held at 1:00 p.m., Thursday, September 19, 2019 at First Presbyterian Church with Chaplain Donny Edwards and Pastor Susan Reichenberg officiating; inurnment to follow at Mt. Pisgah Cemetery. On September 13, 2019 at 12:30 P.M. Carrie DeAnn (Worman) Reed lost her fight against pancreatic cancer and passed from this world. Carrie did not let this terrible disease take away her love and smile for all those that she was close to and held dear. Her love and enthusiasm were infectious to the end. Carrie was born in Gillette, Wyoming on October 9, 1968 to Brooks and Clara Worman. She grew up and attended school in Gillette, graduating in 1987. Most of her life was lived in Gillette with brief residences in Oklahoma and Kansas. Carrie had a love of horses, and the outdoors however; her greatest loves were for her family and her three children: Casara, Tynan and Brooklin. Also, an unbounding love for her granddaughters Audrina and Bryleigh to whom she was known as Monga, in addition to a large amount of friends. She will be missed by many and she is survived by her parents, Brooks and Clara Worman of Gillette, Wyoming; her children, Casara (Devon) Erickson of Gillette, Wyoming; Tynan Reed of Gillette, Wyoming; Brooklin Reed of Gillette, Wyoming; as well as her granddaughters Audrina and Bryleigh Erickson of Gillette, Wyoming; her brother Donald (Evalina) Worman of Scottsbluff Nebraska; along with their four children Danielle Buckley, Maverick Coleman, Alexander Worman and Gabi Worman and her loving extended friends and family. The family request that memorials be made in Carrie’s name to benefit Close to Home Hospice. Memorials and condolences may be sent in care of Walker Funeral Home 410 Medical Arts Court, Gillette, WY 82716. Condolences may also be expressed at www.walkerfuneralgillette.com

To order memorial trees or send flowers to the family in memory of Carrie DeAnn Reed, please visit our flower store.